Are vintage guitar pedals really worth it? 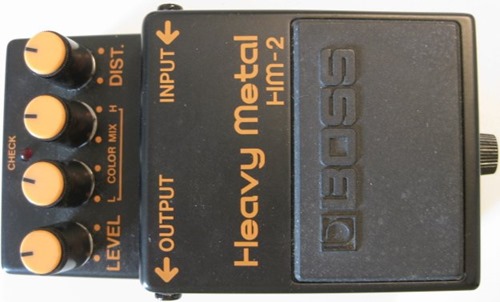 For my regular readers, you know I use a DigiTech RP360 as my primary effects unit, and I'm very happy with it. Is it perfect? No. The interface could use some work. But as for how it sounds, oh yeah, great stuff if you're willing to dive into what it's capable of.

Above is a BOSS HM-2. There are plenty of vintage versions of this to be had. Would I suggest buying one? No, I wouldn't. Why? Because it sucks and sounds awful.

No, it is not because I don't know how to wield one correctly. It's because the HM-2 is truly a crappy pedal. In the '90s, I borrowed one of these from a friend, who only lent it to me because he never used it, and quickly realized why he never used it. Awful pedal.

Unfortunately, some dope will see the HM-2, see that it's old, and figure "if it's old it must be good." No, no, no, frickin' no. It was bad in the '80s, bad in the '90s and guitar players aplenty tossed these things aside without giving it a second thought. HM-2 pedals would sit in guitar stores for months because nobody wanted them.

Now I'm not saying that all vintage pedals are bad...

Pedal effects were never designed to last more than 10 years, and that's being generous. With regular use, most will suffer some sort of major failure in less than 5 years. Why? Because you stomp on it, yank cords in and out of the thing, and it sits on the floor taking in all the dirt settling down there on top of the dirt on your shoe you mash there every time you use it (and if you say you have perfectly clean shoes, you're lying.)

I personally would never buy a vintage guitar effect pedal, even if it was never used, because electronics do not age well and never have.

True. But you're not THROWING THEM ON THE FLOOR and stomping dirt into them, are you? Of course not.

Even with never-used vintage effects, the knobs will be scratchy and there's a high probability the foot switch won't even work correctly.

I would only buy a real-deal vintage pedal effect if the entire unit was gutted, all knobs replaced, foot switch replaced and every solder joint redone, because then I will know it will work like it's supposed to. Like hell if I'll ever buy a pedal that was sitting in someone's dank closet for the better part of 20 years. Screw that.

...means nothing. No matter how well a pedal effect was built, it is not immune to the ravages of time. Electronics are not like a guitar's wood. Electronics are circuit boards, solder joints, capacitors, wires, potentiometers, chips and so on. None of those things age well.

At least with a piece of sealed wood, it has some kind of protectant on it. Not so with a pedal effect. Doesn't matter that it's in a metal or plastic case, because all that moisture and dirt will work its way right in there, guaranteed.

Buy vintage pedal effects if you want. There are plenty of people willing to take your money for them. I'll stick with the new stuff, because at least I know the thing will actually work right out of the box with no surprises at all.

And by 'new stuff', I don't necessarily mean all-digital. There are plenty of awesome new analog pedals out there, many of which are really, really good.

Vintage gear is cool and all that, but for pedal effects, just know you're dealing with old electronics that might be more trouble than they're worth.