A look of Strat I really like, which I did own at one point (more on that in a moment), is black body, white 3-ply pick guard, maple neck and fretboard.

Is this configuration of Strat easy to come by? Online, yes. In a store, no. You rarely see black Strats with a white pick guard and maple fretboard in-store because it's "too plain", but is in fact one of the coolest Strat looks you can have. Sometimes the basics just work the best.

Here are all the black-Strat-with-maple-fretboard models available. At the end will be a custom way of doing it that I'd personally do to save a few bucks for the look I want.

This is a least-to-most expensive list that's readily available to buy right now. And remember, you almost never see these in guitar stores, so you'll have to buy online to get it.

Also, one more thing. I'm skipping the signature model, "road worn"/"relic" crapola and anything that strays outside of the SSS/3-knob setup.

We start with the cheapest. I think the only bad part about the Affinity is that I don't believe it has a 3-ply pick guard. But even in 1-ply it does have the classic look.

The Standard is the one I owned before. I bought used in the hopes it was good, but it wasn't. If I bought another, it would definitely be a new one.

Standard has notable improvements over the Affinity. Basically put, everything is upgraded. Body, bridge, tuners, pickups, electronics, all of it.

After the two Squier models we make the jump right to Fender with the Mexico-made Standard model.

This particular black Strat is the one that would suit most people if you wanted a no-fuss "working man's" Strat.

At first glance, the '50s Strat looks identical to the Standard, but there are several things different about it.

Second, "soft V" shape neck, which has a decidedly different feel compared to the modern C on the Standard.

Third, a rounder 7.25-inch radius compared to the flatter 9.5-inch of the Standard.

Fifth, vintage-style open tuners, while the Standard has sealed tuners.

Lots of things change up with this one.

One of the best-looking, no doubt. But you have to know what you're buying into when you get one, because it really is true-to-70s spec - with one exception. Thankfully, the '70s Strat does not weigh nearly as much as a real-deal 70's Strat would. Back in that decade, Strat guitars were ridiculously heavy. Fortunately, this one isn't.

So what makes this different than a Mexico-made Classic Series '50s? A few things.

The neck shape is "thick soft V", meaning a chunky neck with a V centerline shape that's thicker than the Mexico model. Both the neck and the body are lacquer flash-coated. Electronics are also voiced slightly different and the guitar has a decidedly "true-to-1956" look, feel and sound to it.

What's the best way to get a "perfect" black Strat for cheap?

You might look at all the above options and think, "Gee.. I like black Strats, but none of the options above are anything I would go for."

I have one you would go for, but it requires minor modification to make it happen. 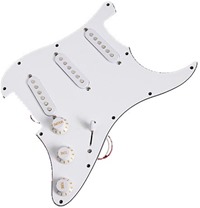 You end up with this when finished (apologies for the horrific image editing I did; I matched it up as best I could):

No, it is not the same as the Squier Standard. The neck has a tinted color, pickups are different, tuners are different, bridge is different and all you're doing here is taking a Vintage Modified and changing black plastics to white on the body. That's it.

For most of you out there, a '70s Vintage Modified Squier Strat with white plastic treatment on the body is the perfect cheap black Strat.