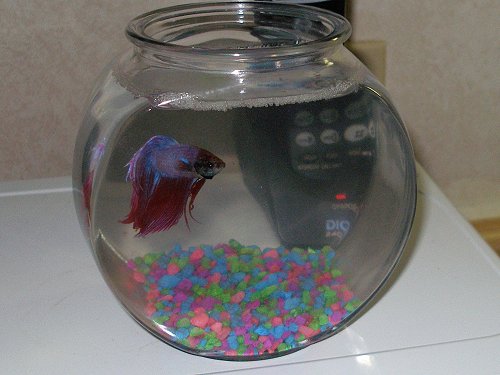 This is Bob the fifth. All my fish are named "Bob" because that's the only word they can "say" (bad joke, I know..)

What happened to Bob I, II, III and IV?

The first three died because of the treated municipal water thing (I'm too lazy to link to that here right now.. just look thru the archives if you're that interested in it).

Bob IV died because the fish had a death wish (hey that rhymes).

I'll explain how this happened.

You're supposed to change the water in a betta's bowl once every seven to ten days, so I do it once a week. When the time comes to change the water, I take a small plastic salad bowl, fill it with water, dump Bob out of the fishbowl into a small net, then into the salad bowl. And no it does not hurt the fish whatsoever to dump him in a net as long as you immediately put him in water afterwards, which I do.

So I'm over the sink dumping water out with the net underneath. Bob IV misses the net entirely and jumps IN THE GARBAGE DISPOSAL.

Although I tried to get him out, there was no way, so um... you can guess what happened after that.

I was ticked off and depressed at the same time. My frickin' fish just jumped to his doom.

So I bought another fish, pictured above. Hopefully this one won't have such suicidal tendencies. 🙂