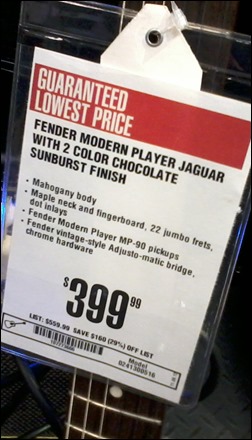 I went to Guitar Center Tampa to pick up some strings and picks, and while there scanned the guitars for the refreshed 2013 Squier Affinity Stratocaster series (new headstock logos and new colors). They didn't have any, but there was a "2 Color Chocolate Sunburst" Fender Modern Player Jaguar, which comes with Fender's version of the P90, the MP90.

Being that I'm into single-coil pickups, I tried it out.

The strings weren't stretched at all, so I spent a few minutes doing that.

After I was done stretching, I plugged into a little Bugera amp and started noodling around on the MP Jag.

Surprisingly, I really liked the way this guitar played. Yeah, it has a gloss-polyurethane neck coating with tint, but play-wise it was really easy to get used to this thing. It definitely "felt like a Fender". 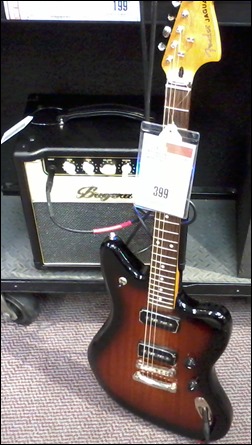 Also, the body on this particular Jag is insanely comfortable. The shape just molds right to your body because there's not a single sharp edge to be found anywhere. The Jag body is even more smoothed out than a Strat body is (which is already smoothed out to begin with). Very easy to get used to sitting or standing. And the weight of it is just right too.

The "Chocolate" sunburst looks far better in person than on the internet. Every internet photo I've seen of the MP Jag in this color makes the guitar look like it's unfinished (as in "not completed"), but when you see it in person, oh yes, it's totally finished and a very nice looker; it could easily pass as an expensive-looking Fender.

Speaking of price, that's my first of three knocks against this guitar.

The only reason this guitar has a $399 price tag is because there's a Fender logo on the headstock. This is a China-made Fender, remember. If the only thing changed were the headstock logo from Fender to Squier, this guitar would be priced at $275, which in all honesty is what it's really worth. Even if it were priced a little higher at $325, that would also be acceptable. But $399? Nope, too much.

My second knock against this guitar is the "Gibson-like" setup. It's basically set up just like a Les Paul except it doesn't have 4 control knobs. Three-way toggle on the top horn, master volume and treble below the pickups, bridge + tailpiece just like a Gibson (which Fender calls an "Adjusto-Matic"). This guitar would be so much better off with the 3-way on the bottom horn instead of the top, because on top it just feels weird being there. Also, the control knobs just feel all wrong (black "top hat" knobs or textured metal knobs should have been used).

My third knock are the MP90 pickups. What a P90 is supposed to do is "growl" while at the same time have some "honk" to them. I know that sounds weird, but if you've played enough guitars with P90s in them, you know exactly what I'm talking about.

The MP90s do growl, but they don't honk at all. Now it could very well be that the little Bugera is what was causing the MP90s not to honk like a P90 is supposed to, but I doubt that. The honk of a P90 (usually heard best when using the middle bridge+neck pickup selection) can usually be easily heard no matter what amp you're using. But on the MP Jag all you've got is growl, which would be fine for some, but not for me because the tone just doesn't have a character I go for.

Final verdict: If the knobs were replaced with the kind with proper texture to them and the pickups replaced with P90s that have some honk as well as growl to them, this guitar would be a winner. The price is a bit steep for an Asian build, but it's a solid guitar all around that only needs very little to sound as great as it plays.