Casio Japan market A158 on the way 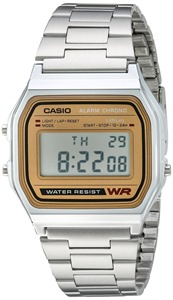 Some new songs are coming soon, but for now, a few words about a gold-tone Casio.

Above is a Casio A158 with gold-tone face, sometimes known as a camel face. I already own an A158 black face version. I spent a few bucks more (literally, it was just around 4 bucks more) and ordered model A-158WEA-9JF.

Why did I do this? First, because the F-91W is great and the A158 is the F-91W in a steel version. Second, I didn't want an exact copy of my existing A158 since I already have one, so I figured I'd go for a gold-tone. Third, I wanted a true JDM (Japanese Domestic Market) Casio. The one I have on the way is direct from Japan, hence the JF at the end of the model name.

Does this mean the watch is made in Japan? No. All A158 models are China-made as far as I know. But what I'm hoping is that I get the JDM-specific packaging which is distinctively different than North American packaging. If I don't, oh well, I lost 4 bucks. But I'm hoping I do get it.

Casio watches with North American packaging for lower tier models are nothing but decidedly cheap blue and white boring boxes.

Casio watches with Japanese packaging, while just as cheap, are made hangtag style like this: 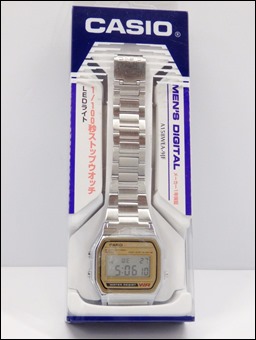 It is interesting that the Japan packaging does have English on the right side, possibly because this is meant for both Japan and certain English-speaking markets.

We used to get watch product packaging like this in America, but haven't for years because this style of packaging is supposed to be displayed in the open. As anyone who lives in America knows, you can't leave stuff in the open in a store because it will get stolen quickly.

Will I actually wear my gold-tone A158 once I get it? Absolutely. To date, I've never seen anyone around here wear one. I have seen the all-gold A159 version being worn, but that's too much gold for my taste. I like the metal color bracelet with the gold face. It works nicely for a little digital timepiece and has the right balance of gold and metal color without looking too garish. Works for me.