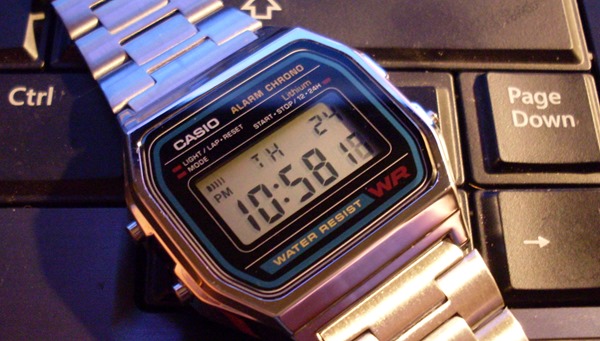 I've only shown this watch in one previous post, so I figured I'd give a dedicated article to it since it's currently my daily wearer.

Now while true the A168 with its electroluminescent backlight is far superior to the wimpy green backlight of the A158, the A168's styling doesn't agree with me. That, and I wanted a copy of the F-91W in a more steely/shiny form, and the A158 is it.

Does the A158 keep time as good as the F-91W? No, but most people wouldn't notice it. I only notice it because.. well.. I just do. The A158 loses a few seconds a week. Not a big deal. Sync it once a week or once a month with www.time.gov and you're good to go.

Second is the metal bracelet.

With watches, you have choices of what material and style the band is. A metal bracelet is something that is just really comfortable. The Casio A158 in particular has a very thin metal band that just has a nice feel to it.

The A158 does not suit big-wristed people. Not at all. Since I have small wrists, the watch works really nice for me. I can wear it slightly loose and it's not really a bother. It doesn't weigh much, either. Granted, it's not nearly as light as the F-91W, but it is still light regardless.

There's really nothing I can review about the A158 because like I said, it's functionally identical to the F-91W. If you know that watch, you know this one.

Basically, if you know and love the F-91W, grab an A158. Or if you want something with a better backlight, the A168 - but pay attention to the styling. As noted above, the A168 styling doesn't agree with me, but you might like it.