I was talking about Rickenbacker electrics and their 12-string offerings recently, so I decided to take a look at what was available for cheap electric 12-string guitars.

Why are 12-string electrics hard to come by?

(if you want to skip this and get to the guitars, just scroll down)

The 12-string electric is not a regular seller, so you don't see them too often. You'll see 12-string acoustic guitars a lot, but for electrics, not-so much. Rarely, in fact.

Why is this? Mainly because not many players want one. That, and there are a few standard problems just about all 12-string electrics have.

Problem 1: It takes forever to string one up and tune it. It takes a bare minimum 45 minutes to do this right. As in detune, clip off the old set, give the body and fretboard a basic wipe-down with a polish cloth, install the new set, clip excess, stretch and tune. There's no way to do this fast.

Problem 2: It's not easy to intonate a 12-string. The 12-string electric is notorious for being difficult to intonate. You have double the amount of strings, and the octave strings are of a different tension for half of them, while the other half isn't. I'm not saying a 12-string can't be intonated, because it obviously can be. Just don't plan on it being a quick process.

Problem 3: Standard tuning or nothing. On a 6-string you can get away with changing tuning without having to intonate again for the most part. But on a 12, nope. You have to basically pick one tuning and stick with it because that's what you're going to intonate to. Standard tuning is the best option. If not standard E, standard D is the next best thing.

Is there such a thing as a "dirt cheap" 12-string electric?

In the under-$200 range, yes they exist. But I wouldn't buy one. On a 12, you are already battling intonation issues. With a dirt cheap 12, it's even worse because it's pretty much guaranteed the guitar will never intonate correctly.

In other words, you can go cheap with a 12. But when you go dirt cheap, that's just a waste of money and you won't enjoy the instrument.

(Important note: See section below the guitars for how to get the best sound out of an electric 12 once you decide which one to get.)

At the time I write this, this is the best cheap 12-string electric I could find. The immediate advantage is that the tuners are easy to deal with. They're all side-by-side and easy to figure out. And the fact this guitar is uses a regular stop piece is a plus as well.

The drawback is that yes, it will have intonation issues. You'll notice that the Tune-O-Matic style bridge does not have separate intonation for the octave strings.

Basically, what this means is that you'll be in tune up until around the 9th fret. After that, not-so much on the wound-string side (meaning strings 4, 5 and 6). The wound strings will be intonated, but the octave strings won't and will be slightly out. Then again, it would be rare for a 12-string player to hold fretted bass-side notes above the 9th fret unless using a capo.

We're already busting over the $350 mark here, but when you want a proper 12-string, you have to spend a little extra.

The advantages of the Danelectro is that the string saddles are easier to deal with, and the lipstick-style pickups will give the guitar are more vintage-style 60's tone to it.

I can tell just by the bridge setup that string changes would be easier on this compared to the Dean. I also personally think it's looks cooler than the Dean does.

Will this have intonation issues like the Dean? Yes. But again, it's probably true you won't be playing much if anything above the 9th fret.

Now we're in over-$450 territory. Yeah, I know. Not cheap. But in this instance, you do get a better guitar for the money.

While not as easy to intonate and adjust as the Danelectro, this one has the best tuners and best pickups. You also get more tonal control from the 4 knobs compared to 2 on the two other guitars.

Oh, and there's another advantage as well. In the way this guitar is made, neck dive is a non-issue. While there shouldn't be any neck dive on the other two guitars, the Ibanez has the least chance of that happening.

Given the choice between the 3 guitars, this is the one you could buy without trying it out first and be the most confident you'd get something good. With the other two, I can't say that. But with the Ibanez, I can, because Artcore is a damned good series that has known good build quality to it.

How do you get the best sound out of an electric 12-string?

There are two things that are required to make an electric 12-string sound good. Flatwound strings and compression.

Flatwound was the popular string of the era at the time the guitars were being made in the 60s. On a 12, they have a very specific sound to them that cannot be emulated with a roundwound set.

Unfortunately, a proper set of flatwound strings for an electric 12 is not cheap, and almost nobody makes them.

One of the few companies that does make an authentic new vintage-spec flatwound set for a 12 is Pyramid: 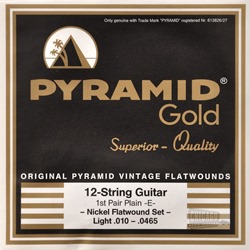 Warning: You will get sticker shock when you see the price of that string set. But it's the only generally available 12-string flatwound set you can buy, and guaranteed to have that vintage-style 12-string tone.

If you want a cheap, extra-light-gauge set in roundwound flavor, you want RotoSound R30SL set.

If you want cheap, super-extra-light-gauge (which you may like because of the double amount of strings you have to hold down on a 12), again, RotoSound with the R30XL set.

I do not recommend 10-gauge roundwound on an electric 12. That exists, but remember, you're holding down double the strings you're used to. With flats, a 10-gauge set is fine because your fingers won't get wrecked. On roundwound, yes they will get wrecked unless you go lighter.

If you can't afford the flatwound set, you won't hear any complaint from me because it's a really expensive set of strings. So if you have to go roundwound to save a buck, that's fine. Just remember you can't get true vintage-style tone out of them. And no, that doesn't mean they sound bad. Round is just a different tone than flat, and that's just the way it is.

Why compression on a 12?

To accommodate for the weird voicing of a 12-string electric pickup.

Pickups on 12-string electrics can't be overly "hot" because they'll be noisy as hell and pick up overtones that will make the sound produced almost unusable. Combine that with the fact that on the bass string side you've got little octave strings "fighting" to be heard, and it's no wonder why a 12-string "rings dead" so quickly.

Do not be surprised if any electric 12 you play has little to no electric sustain to it. Note that I said electric and not acoustic. Acoustically, it will ring out fine. Electrically, it won't...

...and that's where compression saves the day: 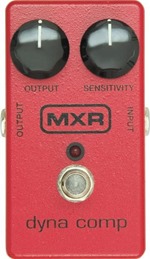 The Dyna Comp, while a bit "thumpy", works nicely with an electric 12. It has old-school electronics in it that suit the odd voicing of an electric 12's pickups.

Is it worth it to own an electric 12?

That depends on what your musical desires are.

Nothing sounds like an electric 12. In the world of electric guitars, the 12 is unique, cool, interesting and can make sounds that 6-string guitars can't.

If you currently gig with a band at all, when you break out the 12-string, everyone pays attention. When people see all those tuner buttons on the headstock, it just looks impressive. And when people hear the 12, that's also impressive even when playing nothing but simple chords on it.

For songwriting, a 12-string is a damned fine guitar to own because it has such a full sound to it. And since you're basically forced to play just chords and no solos on one, it can arguably be said it's a better songwriting guitar.

For song styles, the 12 has what's best described as a cinematic quality to it.

If you remember the soundtrack for Diablo II video game in the village of Tristram, that's a 12-string:

...so the guitar isn't just meant for hippie rock. Far from it.

In the end, if you think, "Wow. I could get cool sounds out of a 12...", buy one. You will enjoy it, as long as you remember a 12 is a bit of a pain in the ass to intonate and restring. The guitar is more inconvenient compared to a 6, but the sounds you can get out of a 12 make it worth it to own.