A guitar this good priced this low was only a dream just a few years ago.

Ibanez, even in a low-cost flavor, certainly gets things right. With GRX70QA in particular, you actually get more than what you pay for.

My favorite part of this guitar is the pickup switching, which is this: 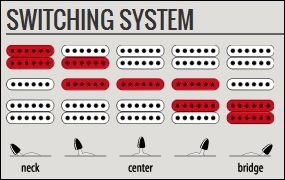 Yes, it is a 5-way selector and not just 3. On an HSH pickup configuration, this is exactly how it should be because you get the most usable sounds.

Also, yes, it's all passive. There is no stupid battery box to be found in this guitar. That's a good thing.

You will notice that selections 2 and 4 are traditional Strat "quack" positions. That's a good thing because for clean tones, those are great to have.

While I personally am not a fan of the HSH configuration, I will admit that if I did want one, this is absolutely the way I would have the electronics set up. One master volume, one master tone, one pickup selector blade with 5 settings that would give me every tone I'd want to get.

Another thing I very, very much appreciate is that this guitar is NOT a 24-fret but rather a 22. This is ideal because it allows the pickups not to be squashed together, giving you more usable sounds from proper pickup spacing. Believe me, if this guitar were a 24-fret, it would sound terrible. Thankfully, it's a proper 22.

Even as little as 5 years ago, getting a guitar with this look for the seriously low price it sells for would have only been a dream. It's not a dream anymore. It's here.

I have three, however they're very minor complaints.

First is the HSH. I'm not a fan of this pickup configuration. It is required here to get those 3-pickup Strat "quack" tones, but I prefer two pickups instead of three.

Second is the fact this Ibanez has two string guides at the headstock. The look of it doesn't bother me. What does bother me is that this can lead to string kinking noises because of the downward pressure from the string to the nut. I do typically bend the G string quite a bit, and with a guide there on the headstock for the G, that can lead to the kinks. But then again, I could always switch out the guide with a taller one, as could anyone else.

Third is something nobody can avoid, and that's resale value. This guitar has none. Once the guitar is bought, you'll never get your money back for it. But then again, since you get so much for the money, that's an acceptable tradeoff.

Who would appreciate this guitar most?

Young players - especially first-time players - would appreciate this a lot because it has an expensive look to it with the quilt top. And, of course, since a lot of younger players are all about the distorted-extreme rock stuff, this guitar can keep up with it.

Older players will appreciate the flat fingerboard just to have something different that doesn't fret out like rounder Fender necks do. In addition, the fact you can get Strat-style "quack" from the 2 and 4 positions is a big plus, because it means the guitar is not a one-trick-pony, so to speak. And while I don't know the weight of the instrument, the poplar body should mean it's fairly light, probably at between 7 to 7.5 pounds.

Guys and gals who gig often will like this too, because it's put through the same QC inspection that the more expensive Ibanez models are put through. Yes, I am saying this can totally be a "workhorse guitar." Buy it, set it up, play your gigs and the guitar will keep up without a problem.

As I mentioned above, the best part of this guitar is the pickup switching. Stupidly simple to use while at the same time giving you almost every possible sound this guitar could possibly get. The only one you don't get is Telecaster front+rear because this is wired to be more Strat-like than Tele-like, but that's okay given its price.

Final verdict: If you like the flatter fingerboard (better for soloing,) HSH configuration and Strat-style switching, the Ibanez GRX70QA is cheap and good. Get one.