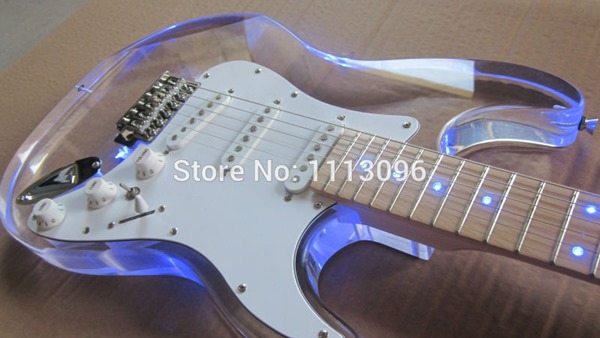 I've decided to start a new feature. Cheap import guitar of the week. This is the first one. I don't know if I'll be doing this every week (it depends what's out there,) but I'll do my best to make this a weekly thing.

There are a lot of guitars out there that are import-only that never see the inside of a guitar store. These guitars are wacky, weird, and most importantly, cheap.

For my first cheap import of the week feature, I'm showing something flashy, that being an acrylic Strat with LED lights all over it including directly inside the fretboard. 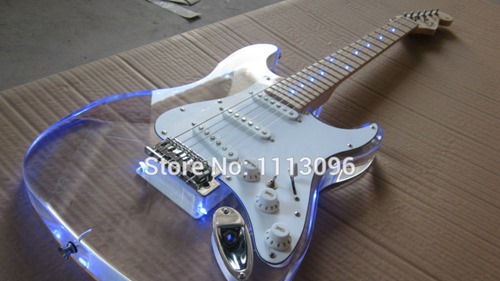 Now if you've been following my blog posts for a while, you know I have no love for an acrylic-bodied guitar for basically one reason. Weight. Unless the guitar is chambered (which this one isn't,) it will weigh a lot, so it's required to wear a well-padded strap if you take this thing to a gig.

However, this is a very cheap light-me-up that's sure to grab attention. For example, if you're playing a gig with this, you will get noticed more because this thing lights up, and that's the whole point of owning it. Cheap gimmick? Yes, but who cares? If you're trying to get noticed, you use whatever you can to be seen, and this guitar will certainly get you noticed.

Also, it's pretty much guaranteed you will be the only guy or girl anywhere with a light-up Strat that covers both the body and the fretboard markers.