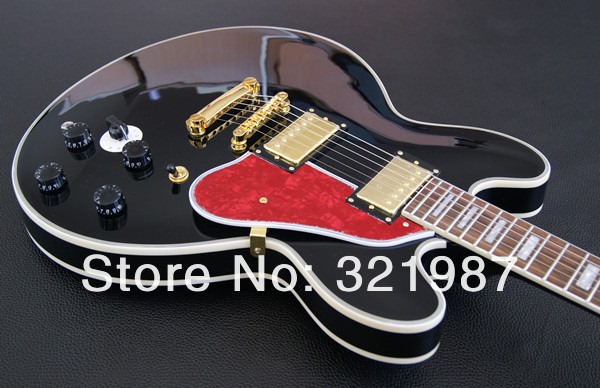 This one is being posted by request.

Someone emailed me and mentioned that there are China copies of the Gibson B.B. King "Lucille" guitar. This guitar, like many (if not all) of the other ones I've posted so far, is cheap to buy..

For comparison on price, check out the cost of one of these in an Epiphone flavor. The China copy Chibson is, of course, significantly less in price. As for the real-deal Gibson price, yeah, it's several thousand dollars.

Personally, I don't like "Lucille" because it is a bit of an electronics nightmare, and you really have to know what this guitar does before buying one, no matter whether it's a Chibson, Epiphone or Gibson.

Now while I won't get into the super-nitty-gritty details of what this guitar does, what it does have (or at least is supposed to have,) is stereophonic output. That's not the problem. The problem is the VariTone knob. Most guitar players have no clue what this does.

"Lucille" has electronics that are, as far as I know, based off a Gibson ES-345 (also a ridiculously expensive guitar.) What VariTone electronics do is allow you to have selectable capacitors that "color" the sound differently. The differences in sound are subtle, and it's nothing like a Stratocaster's 5-way blade selector. On a Strat, when you use the blade, you are physically changing which pickup you're using. With a VariTone, you're not doing that and instead letting a different capacitor change the sound of the guitar.

I cannot describe in words what the change in tone sounds like when you have selectable capacitors. You have to have a bit of a trained ear to really know what to listen for.

On the Jazzmaster and Jaguar for example, both those guitars do in fact have a selectable capacitor, but only one for one setting, that being the rhythm circuit controls on the top horn. When you switch to that circuit, there is in fact a separate capacitor there that cuts off some treble, and the change in tone (at least to my ears) is very obvious. But again, that's just one separate setting. "Lucille" has 6.

If you like "Lucille," then by all means, go ahead and get one. I personally wouldn't in any flavor just because of the ridiculous amount of electronics it takes to make one work (meaning if one ever needed electronics repair, that would suck.)

What I would suggest as an alternative that's relatively cheap and has way simpler electronics is the Epiphone Dot. If you like the larger archtop style but want something a whole lot simpler that can actually be worked on, the Dot is the guitar you want. Far easier to swap out/repair electronics and has a standard monophonic output jack.