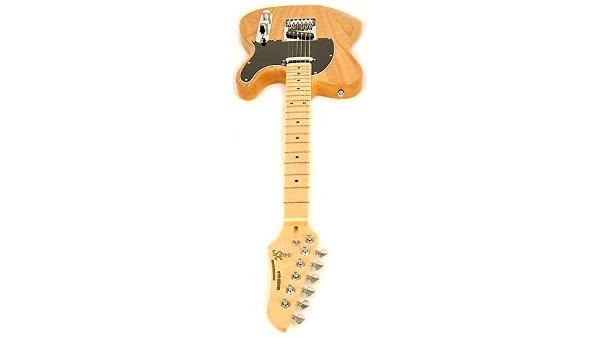 While I am a fan of the Squier CV Tele, this is the next best thing if you're really stretched for cash.

The best under-$400 Telecaster that exists right now is the Squier Classic Vibe 50's Telecaster in Butterscotch Blonde; it's a guitar so good that many believe it is the best guitar Squier makes - and that's no joke. The CV 50's is a no-brainer purchase, and I can even recommend buying it without trying it first. Yes, it's that good.

What's the next best thing after the Squier CV 50's? The SX Furrian MN Ash NA. It's under $150 new and is a darned good guitar.

Better than the Squier Affinity Tele for under $200? Yes. Not only it is cheaper than the Affinity, it has better hardware and better wood selection and a belly cut in the back of the body, which is a big deal. Some guys don't like the Tele body because of the lack of a belly cut. The SX has it, just like a Strat would.

Now to note, what I mean by "better wood selection" is that in a natural finish, that ash body just looks really good on the SX. It's a nice hunk of wood that will look good on your guitar stand, and you'll also like it when playing it.

As far as a well-built Telecasters go that are south of $500, Squier is the king with the CV 50's. You can't get a better Telecaster for that kind of money.

SX takes up the lower price point with its Furrian MN Ash NA. For a well-built Telecaster south of $150 new, nothing can touch the Furrian.

Furrians sell out quick and routinely go out-of-stock because they sell so fast. If you want a good, cheap Tele, get one now.