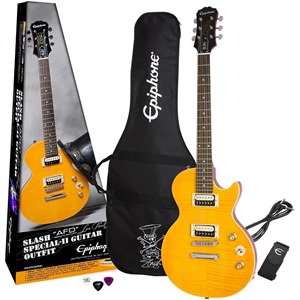 I wish they sold this guitar individually without the pack. But then again, this is so cheap that it's forgivable.

What we have here is a dirt cheap Epiphone Les Paul. The price is really low. So low that the guitar alone would sell for about $89, and I wish it did, but you have to buy the pack.

The thing about this guitar that makes it worth getting is the tiger stripe finish, or as described "AAA Flame Maple top." Yes, it really is billed as that. The body is also bound. For a cheap Paul, the look of it is actually quite good. Looks nice, cheap and ready-to-rock. Can't ask for much more than that.

Guitar manufacturing is at the point where you can basically get any look you want for insanely cheap prices, and the Slash AFD pack is an example of this. It's a finish specifically made for this pack which is why you will only find it in the pack.

Worth the buy? If you like Les Pauls, I think so. Think of it the same as the Epiphone Les Paul Special I P90 in a traditional double-humbucker configuration. If you know the P90 Epi Paul, you already know this one. The main difference is the finish and the fact the Slash Paul has a traditional bridge + stop piece whereas the P90 Paul has the wraparound.

Would I personally buy this guitar? No. But if I were buying a first guitar for someone as a gift, yes I would.

If you wanted what's arguably the cheapest Les Paul that has a bound body with a flame top and isn't a Chibson China knockoff, this Slash Paul is it.