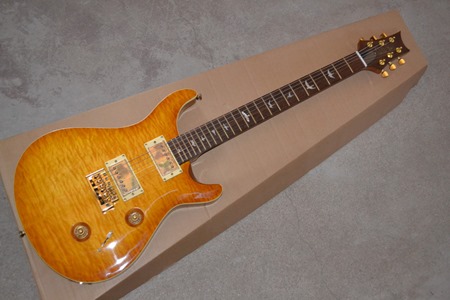 For this week's cheap import guitar of the week, we have a Paul Reed Smith, I mean, um.. Chaul Reed Smith guitar.

Above is a copy of a PRS Custom 24, and it's dirt cheap. Like with any of these I list, I have absolutely no idea how it plays or sounds, but again, cheap, and that's what counts here.

As you'll see from the listing, it does have the bird inlays, and gold-gold-gold everywhere, even on the frets. The back of the guitar is mostly correct. For those knowledgeable about the PRS Custom 24, the first thing you'll notice is that the rear plate isn't the correct shape. But who cares given how low the price is?

What's the best part about this guitar? It's cheap enough to where you can hack and mod it up and not care.

Personally, what I'd do with this guitar is put in a set of Seymour Duncan zebra humbucker pickups. Specifically, the SH-4 JB Bridge and the SH-1 59 Neck which can be bought as a set. The zebra look would work well for the finish on the PRS copy, and it's a good pickup set without spending an insane amount of cash on it.