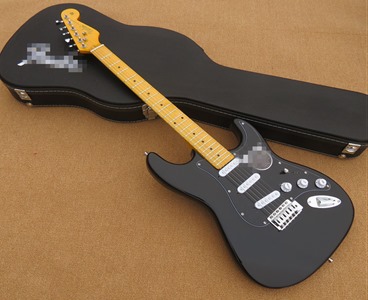 Somehow, I doubt this is "Made In Usa," but it's still a cool dirt cheap guitar. 🙂

Above is a very convincing David Gilmour Stratocaster copy. And believe me, you will want the copy over the real thing. Why? Because the real thing is over 5 grand, while the above is under $300. For that price, don't buy one. Buy two.

On the Gilmour China copy, they even got the neck correct, so the look of the guitar is a spot-on. As for the rest of it, that I can't say because I've not played it.

However, I can say this: The real-deal guitar has Fat '50s pickups in it and some Seymour Duncan electronics wizardry. You can get damned close to that by buying a Fender Custom Shop Fat '50s pickup set. That set is not as expensive as you think it is. Actually, it's a fairly good deal, even as a Fender-branded product. So when you want that "sparkly" tone the Gilmour Strat has, that set of pickups is pretty much how to get it.

Or, you can outright buy the Gilmour pickup set. But it costs more than the Fat '50s set. Your choice.

If you like the Gilmour Strat, this Chender is a no-brainer. Get one.