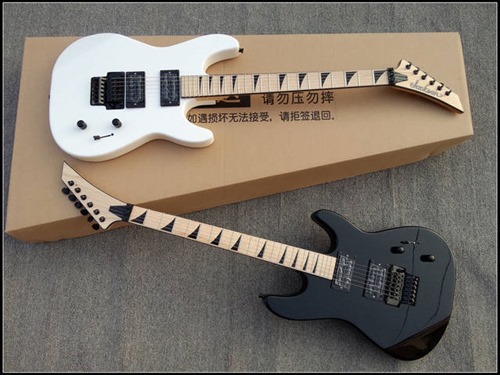 Arguably, this is the best cheap-import feature yet. And I'll tell you why.

Now that you know how much it is, here are two huge reasons to buy this China knockoff instead.

But why so amazing? That's the second reason, which is there is maple color on both the headstock and the fretboard.

The maple + maple is one of the most badass looks that Jackson ever released, and they are not easy to come by - never mind see one for under $300.

Whenever you see a maple fretboard on a Jackson, the headstock is always painted black. Ugly? Yes. But the maple + maple looks incredible. It has that oh-so cool "ultimate guitar rocker" look to it like it came straight out the 1980s - and that's not a bad thing.

Even if the frets are a little uneven on arrival where you need a guitar tech to do some minor touch-up work, it's worth it because nobody else will have a Jackson that looks like yours.

Here's the part that's awesome and funny at the same time. Even as a knockoff, it's easily worth 500 bucks just for the maple + maple combo. No joke. There are Jackson players out there that would do anything to get a maple + maple guitar like this, because at present, Jackson is painting all their pointy headstocks.

The only way to get this guitar in a look like this from Jackson would be to have the custom shop craft it for you. Don't bother. Get the knockoff and enjoy.