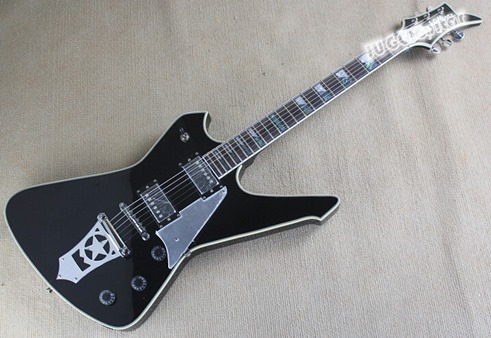 I'd actually prefer this over the real thing.

The real-deal Washburn Paul Stanley PS1800 guitar is disgustingly expensive. No, it is not an Ibanez, meaning not a PS120 Iceman. This is a Washburn copy.

A Washburn PS1800 is an overpriced piece of garbage. And I mean way overpriced, as you'll see from the link above (the PS120 is a deal in comparison.) The China knockoff copy is in fact a fair price for what the guitar should sell for.

Now to note, Washburn does make some fine guitars. Truly, they do. The PS1800 is overpriced to an insane level because of "PAUL STANLEY," but when you look at other models, such as the Washburn XMDLX2TNG, you'll be shocked at how low the price is for a genuinely good guitar. Seriously, check it out. And it's not a knockoff, but rather a real-deal Washburn.

The PS1800 knockoff is a good buy, but only the knockoff. To spend cash on the real thing would be seriously stupid.

The knockoff would be a nice guitar just to thrash around with something different without spending a lot. Get one.