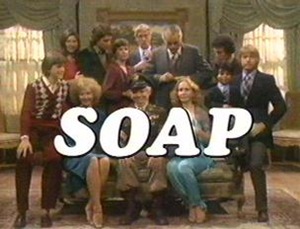 I have a thing for 1970s TV sitcoms. I was born in 1975, but as I got older I just made a beeline to 70s television. For years I couldn't understand why, but I think I've figured it out now somewhat.

When you watch just about any show from that era, it's like going into another world, because for all intents and purposes, it is. And for my guilty pleasure of diving into 1970s TV in this bloggo, we'll take a look at Soap (which by the way is on Netflix in its entirety, all seasons).

Soap looks weird because it was purposely shot in video and not film. This was probably done on purpose to further push along the idea of parodying daytime soap operas of the time, which were some of the first to switch from film to video.

Video technologies of the 1970s were awful. Skin tones no matter the color are nowhere near what they're supposed to look like in real life. Also, everything looks out of focus even though it's in focus. That was the best they could do with the technology back then. It was also very common to see sheens of light and even hot spots in some instances because the sets were lit up like a Christmas tree with super-hot lighting to accommodate for the bad color reproduction of the cameras being used.

The positive to all this awfulness is that it created a look of its own that is decidedly 1970s and belongs to no other era.

Should you decide to watch this show, something you have to bear in mind is that Soap was made at a time when all TVs were tube-type, so of course the show was made to look best on that type of television. Tube-type TVs of the era easily hid imperfections and video editors knew this. When viewing this show on a modern flat-panel or computer monitor, you see the whole frame (remember, on tube-types the outer edge of the frame is cut off) and every single imperfection really sticks out.

"Recorded in front of a live studio audience"

As far as I'm aware, every episode of Soap was recorded in a studio with a real audience, meaning no laugh track and no added-in laugh audio. Every laugh you hear is real.

There are shows that still record in front of an audience today, but nowhere near the same to what shows like Soap were like for two reasons. The first is that if a joke really went well and the audience was roaring with laughter, the actors had to purposely wait until that died down until moving on with the script while at the same time getting the scene done in a way that could be "fit" on television with commercials. And if the joke dropped like a brick, the actors had to speed along to the next joke quicker to keep the flow of the show going.

If that's not pressure, I don't know what is. It's even more difficult than doing a stage play because you're bound by the constricts of TV time.

Soap aired from 1977 to 1981, and there are jokes told in Soap that would greatly offend people today or at bare minimum make them feel very uncomfortable. In the very first episode, you'll hear jokes that are racist, sexist, homophobic and demeaning - but it all magically works because the show was written by the right people and acted by the right actors.

The 1970s was very daring and it was a golden time for television. They did stuff on TV back then they wouldn't dare do now for fear of having their network offices stormed.

Some people just know how to do it right

You may notice that the end title credits for every episode of Soap look exactly the same as The Golden Girls. There's a reason for that. Susan Harris created them both.

Susan had a magic touch for television sitcoms that has not been equaled by many. The woman simply knew how to come up with killer ideas and even more killer jokes. She's simply a force in television, no question about it.

Soap's humor does not translate at all in 2012

I have enough knowledge about 1970s popular culture where I understand the jokes in Soap and know why they're funny. And for some I'll even laugh out loud at them.

However, unless you know 1970s popular culture like I do, or are older than I and lived through it, you won't understand Soap. In fact, you'd probably find most of it pretty boring and/or be distracted by other things easily while watching it. You may think, "I can't believe people used to dress like that!", or "Hey, look! A rotary phone!", or "Why are so many things colored avocado or dark yellow?", etc.

The first episode of Soap aired 13 Sep 1977, which at the time of this writing was 34 years and 5 months ago. In other words, a long frickin' time ago. You have to accommodate for that when watching Soap. No cell phones, no personal computers, no internet, no cable television. Things were really different back then.

Why do I bother watching this stuff?

I like the jokes and the cultural references, but a lot of the reason I watch it is for style. In that sleepy little New England town I grew up in, 1970s style ruled the roost in just about everyone's house all the way up until the mid-1990s. Yes, really.

It was not uncommon at all to go over to a friend's house and find crushed avocado-colored carpet, or in some instances shag carpet. It was not uncommon to see wood everywhere. Varnished wooden shelves, varnished wooden entertainment centers, faux wood-covered clocks, etc. I mean, you saw so much stuff from the 70s all over the place that you'd think everyone bought everything in 1977 and just stopped right there.

It wasn't until the early-to-mid 1990s where everyone upgraded their old stuff. Yeah, it took that long.

People these days throw out stuff every 5 years because everything is made so cheap and breaks sooner. Why do you think there's so much stuff in perfect working order from the late 70s and early 80s on eBay? Because it all still works.

So yeah, the 70s stuff brings back a little bit of how things used to be, without having to buy 700lbs. worth of 1970s crapola to make it happen. Remember, a VCR in the 70s was something like 30 pounds. Yeesh..