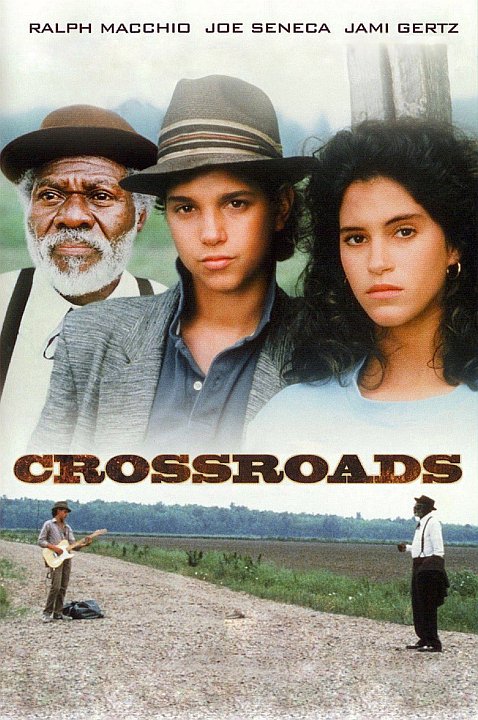 Crossroads is unofficially The Movie For Guitar Guys. Steve Vai is even in it. Yes, really.

I originally watched this movie back in the 1990s because that's when I really started getting into guitar and was soaking up all things guitar-related.

Hot off the success of The Karate Kid and just a scant few months of the release of The Karate Kid, Part II, the star of the movie is Ralph Macchio, and plays the character of Eugene Martone a.k.a. "Lightning Boy," a kid who was trained in classical guitar but then falls in love with the blues and then in the end gets into this Heaven vs. Hell guitar battle thing.

Yeah, this movie does feature a guitar battle.

Why was this movie made?

I'm pretty sure it was made to capitalize on the fact that in the mid-1980s, glam rock was FREAKIN' HUGE. It was the #1 style of music pretty much everywhere, every kid wanted a guitar back then, and someone thought it was a good idea to make a movie about guitar playing...

Interesting factoid: Arlen Roth, who was an uncredited real guitar player to help with the Crossroads music production, taught Ralph how to play, 2 hours at a time, for 2 months.

In that linked article, Arlen goes on to say how Crossroads was a great experience all around because it does have a good amount of authenticity to it in the respect the director really tried (and for the most part succeeded) in capturing the old-school southern blues theme on film. Artistically speaking, Crossroads does nail it pretty well.

Should you watch it? Yeah, you should. True, there are some scenes in the movie that are just bad (like the part where Eugene somehow hits this ridiculously high note using just fingers on a Fender Telecaster that has only 21 frets,) but it's still a good watch. You should check it out.