Only one type of watch is the best daily wearer 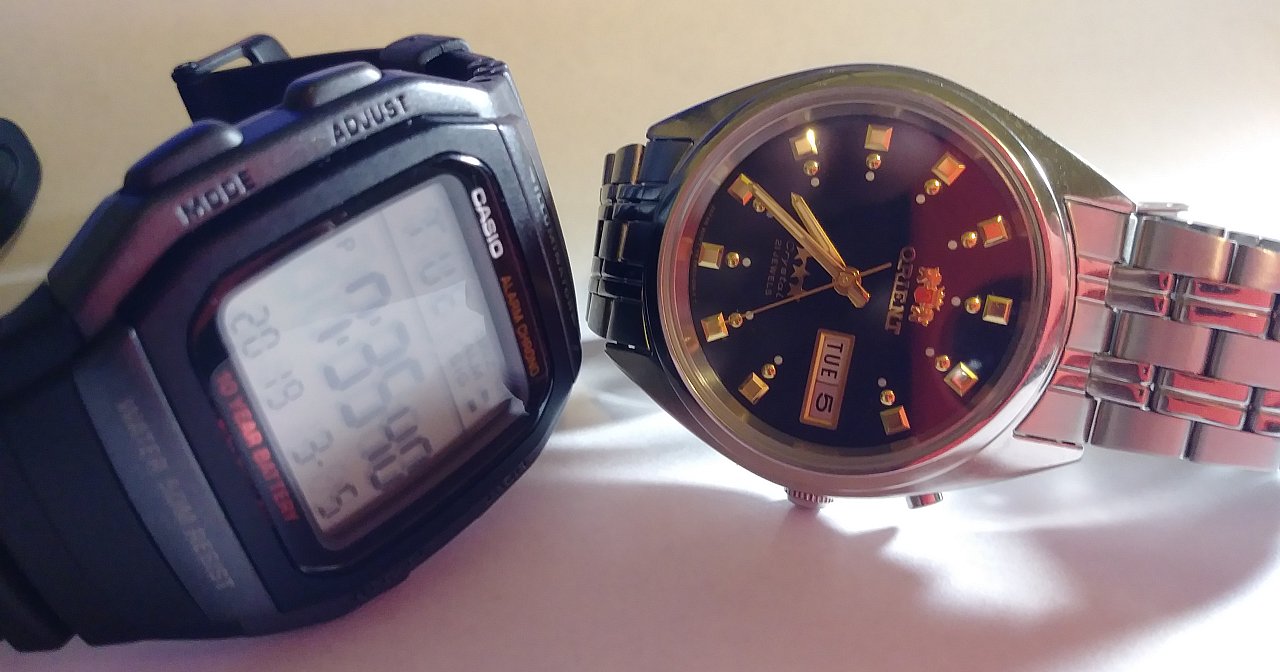 This is the latest concerning my wristwatch journey.

On the left is my recently acquired Casio W96H, and on right the Orient Tristar model FAB00009B. The Orient was a watch gifted to me that I've had for some time now. Still works great, no issues. I should note that the Tristar has a bunch of different colors available, and that includes gold models.

At one point I did briefly own a Seiko SNK803 (also available in several different colors), which is very similar both in size and price to the Orient, but returned it because the dial was just too busy for me.

Every now and then I put on the Tristar because it looks cool and I dig the fact it's 100% mechanical. Typical to traditional automatics, it loses between 15 to 30 seconds a day, so it will never be as accurate as a quartz digital. But I still dig it just the same...

...however I've never been able to use it as my daily wearer.

This doesn't mean I don't like the Tristar because I absolutely do, but every time I put on an analog timepiece, I miss the functions I get with the digital. No alarm, no stopwatch, no hourly chime, no display of the month.

The do-it-all watch that gives you analog with all the features of digital is of course the ana-digi. I own one, the Casio AW80V-5BV. But I don't wear it that often for the same reason I got rid of the Seiko SNK. The dial is too busy for my liking. Great watch, but again, busy dial.

There are mostly (no alarm) do-it-all watches that are 100% mechanical. These are automatic day date chronograph timepieces. None of them are cheap. An example of this is the Junghans Chronoscope. Quartz versions can be had for under $400, but for mechanical it shoots right up to well over $1,000. And I'm not about to spend that kind of cash when I get the same functionality plus more out of a $20 Casio.

I always go back to a Casio

The Casio quartz digital is still the best thing going; it is the best daily wearer.

I own a bunch of a watches, but no matter what I will always end back up with a Casio digital on my wrist because it does the job so damned well.

However, there are a few things I've learned concerning other timepieces.

My favorite ana-digi is the Casio G-SHOCK Gulfmaster. While I really dig the look of it, I've never owned one nor even handled one, and won't because the dial is ridiculously busy.

Busy dials are present on almost every ana-digi made. One of the very few that isn't is the Casio AQ230. On that model, the digital part is only a small horizontal bar at the bottom of the dial, and the hands on top never cross the digital area. This is, without question, the cleanest, simplest ana-digi sold right now. And I might get one at some point.

The best analogs are just the clock and only the clock

I'm currently on the hunt for a cheap, quiet analog timepiece that is clock-only that fits my wrist and has a nice look to it.

Technically, I already have it. A Timex Weekender 38mm. But it has a loud tick and I can't stand that, so I don't wear it.

I may pick up a Casio MTP-V001. This is a watch I owned before, but not in steel bracelet version.

Whatever I decide to get next, I will be picky about it because I already own too many watches as it is.

I'm glad the hobby is cheap. 🙂