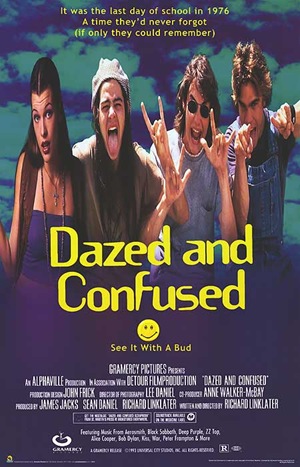 Dazed and Confused was released the year I graduated high school, 1993. I first watched this flick in the 90s and recently re-watched it.

D&C gets high ratings, but that's only because most of the people who rated it as such attended high school during that era. Many reviews say what the movie shows is exactly what happened in '76 and that it was all awesome, but I'm pretty sure that's wishful thinking more than anything else. It's like me saying the early 90s were totally awesome when I know for a fact they totally weren't.

When I watch D&C I'm reminded a lot of the small town I grew up in. No, my little town didn't have hazing/initiation teen rituals like the film shows (or at least not that I know of), but it did have the exact same boring-ass feel which causes a lot of people to drink and smoke weed simply for the fact there's nothing better to do. In fact, several times throughout the movie you'll hear people say they're bored out of their minds, which is why they do what they do in the first place.

The thing to know about this movie is that it's not about high school but rather teen culture of the era. It's actually pretty interesting how mid-70s teen culture parallels with early-90s culture. The music, clothes and hairstyles might have been different between the two times, but the boredom that was abound was identical. Many things that happened in D&C happened in the town I grew up in, so I can somewhat relate to it.

A friend said to me recently that I have an 'old soul' since I know so much about cultural stuff of the 70s, and I think that's why I watched this movie in the first place. However after watching it, my thought is, "Eh.. glad those times are over."