Did you know the 1TB USB thumb drive exists? 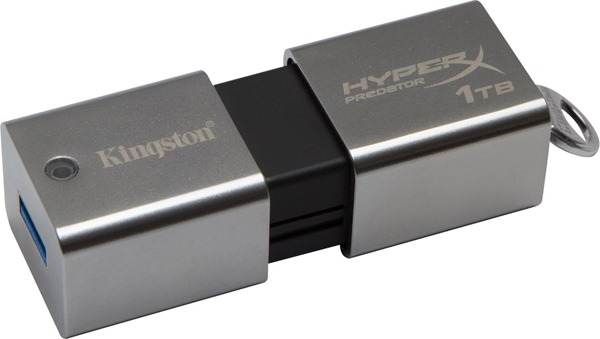 Above is a wonder of modern technology, the 1TB USB flash drive. The nerdy side of me wants one of these things...

...but I wouldn't buy it for one reason. It's insanely expensive, but that's only because it's still such a new technology at the time I write this. And it's a bit chunky at 2.8 x 1.1 x 0.8 inches. That's not physically big by any means, but for a flash drive, it's a fatty.

But here's something that will make you feel better instantly. 64GB flash drives are now insanely cheap, so if you haven't bought a USB pendrive/flash drive/thumb drive/whatever-you-want-to-call-it in a while, go ahead and get a 64GB. If you want even cheaper, get a 32GB flash drive. You can grab one for under 15 bucks now. Yes, really.

DVD-5 is still the cheapest of the cheap, for now 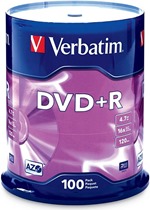 When you want the cheapest possible way to store a bunch of data, you get DVD-5 discs. Purposely buy only 100-count spindles of them, and buy the one suited to your needs.

For discs intended to be used for data-only storage, you get DVD+R.

For discs intended to be used for movies to be played in a console player, you get DVD-R.

Yes, there are differences between +R and -R. I won't get into all the technical differences, but I will say this:

The entire reason you use the -R type in console players is because that's what was supported first since it is the older format. So no matter what console player you chuck a -R disc in, it will play. And by this, I mean a disc burned "movie style" with the VIDEO_TS folder. If you've ever burned DVD movies, you know what I'm talking about.

The entire reason you use +R type for data storage is because it's much better suited for it. DVD+R is multi-layer while -R is single-layer, you can mix video + data if you wanted to on +R whereas on -R you cannot, background formatting is allowed on +R, and there are other reasons.

Oh, and the best reason of all to use +R over -R for data storage: Far less chance of data corruption when reading or writing. You use -R, and you will encounter data screw-ups. Use +R, and the chance of that happening is decreased a great deal.

However - and I can't say this loudly enough - the only reason to use DVD-5 is because it's cheap and for no other reason.

If you can afford to store your stuff on flash drives, do it

USB flash drives are not the cheapest way to store data, but every year the price of flash memory keeps diving down.

What's the #1 reason to store on a flash drive? No moving parts. Anything that moves will break faster than something that doesn't. This is why traditional hard drives with spinning platters only have a reasonable life expectancy of 5 to 7 years while a USB flash drive can be used for 10 years before it starts majorly screwing up.

The only way to really kill a USB flash drive is to beat the crap out of it with constant file writes, such as running an operating system off of one. At some point, the flash drive won't allow data to be written to it anymore. You'll be able to read data, but not write.

And yes, that means if you have an older USB flash drive kicking around where you can still read data from it but can't write a thing without it corrupting like crazy, it's time to copy the data to another USB stick and chuck the old one in the trash.

The only other thing I know of that kills USB flash drives is if the contacts wear out, or the contacts become corroded just due to age.

To date, I have only had one USB stick fail on me. It was a 512MB (yes, MB and not GB) Sandisk cruzer stick. It still worked, but the thing just wouldn't hold any data no matter how many times I formatted it. I even low-level formatted it (if you Google "HDD LLF Low Level Format Tool," you can low-level format a USB stick that way,) and that didn't even work, so yeah, it was time to chuck it. The point is that it took almost 10 years for it to screw up that bad.

Having any media storage last 10 years is actually pretty damned good. Stellar, in fact. If you ever needed a reason aside from the convenience factor to use USB flash drives over DVD, well, there you go. 🙂