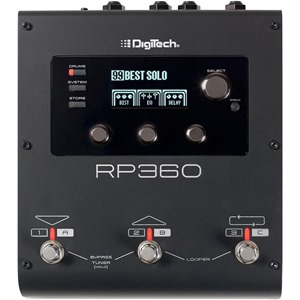 Although the RP360 has been on the market for something like a year, I just found out about it recently. My cost for it was almost free because I traded out my GSP1101 for it.

I took a guess that the RP360 sounded just as good as the GSP1101 with the addition of a 40-second looper in it. And I was right. It sounds exactly like the GSP1101. And believe me, that's not a bad thing. Not at all. In fact, it's a very good thing because the GSP1101 is a supremely good effects processor.

A while back I owned a Hotone Wally looper pedal. It started developing problems. Namely, the internal storage it used would crash, resulting in high-pitched nasty noises, so I had to part with it.

Ever since then, I've wanted a looper again. But at the same time I didn't want to give up my GSP1101. When I found out about the RP360, that is what I was waiting for. A floor unit that has just about everything the GSP1101 has, and a looper. I was sold.

Not as good as the GSP1101 was. The GSP's menus were a lot more straightforward. The RP360's menu layout, while not exactly terrible, does the annoying thing of making you scroll horizontally instead of vertically to get to certain functions.

Yeah, I can get to everything I need to, but that go-right-or-left-to-do-anything is a bit trying on the nerves. However, it's nothing I can't get used to.

Just right. It also has nice rubber feet so it stays put. Good. Very good. The RP360 has some weight to it, but isn't too heavy. DigiTech definitely got it right here.

This could be larger when looking at it from standing position. Yes, it's readable, but I'm 100% sure it would totally get washed out in sunlight for outdoor gigs. But then again, so would any other pedal even with an LED display.

For indoor use, yes, it's fine. And for playing gigs, you can assign custom presets so you could operate the unit by muscle memory without even having to look at it if you wanted to.

Like the GSP1101, you do have to purposely set the unit to "MIXER" output instead of "AMP" for feeding into a mixer/recorder so it sounds right. I knew this up front, so it was no big deal.

Fairly useless, but nice to have, I guess. Some players will appreciate it.

Even if I had paid full retail price for this, it's still one heck of a multi-effect pedal for the price.

Now if you're thinking, "Gee, if the RP360 had an expression pedal, it would be perfect", you want this: 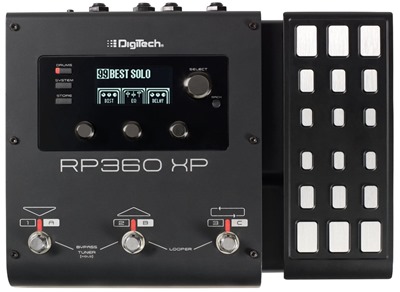 A farewell to rackmount units

The reason I bought the GSP1101 originally is because for the longest time I used nothing but rackmount effects processors. I used them so much that I had become basically anti-pedal. I hated floor units, hated wires running on the floor, hated the fact that pedals get dusty really quick, and so on.

However, things change. I changed as a player.

You can't use a looper without it being a floor unit; that's required. And pedal technology has advanced enough to where you can get all of what was in the older rackmount units in a floor unit and have an expression pedal if you want and have the looper too.

For home recording, which is what I do most, it basically doesn't get any better than the RP360. Small enough not to be a burden, big and weighty enough for each foot control in a chassis that stays put and, of course, great sound.

Like I said, I was sold, and in less than a day of owning it, I was so happy to ditch the rackmount for this. I lost nothing by switching over.

Oh, and one final selling point of the RP360. It comes with a power supply. Yes, it does. No need to buy a separate one. That's about $20 saved right there. Maybe that's not much, but I can't stand electronic things that don't come with their own power supplies (like the Wally Looper.)