Do Stratocaster and Telecaster guitars have naturally buzzy necks?

Fret buzz is when you play your guitar and the strings literally make a buzzing sound; this buzzing can happen whether strings are played open, or maybe your Strat neck only buzzes when playing chords on certain frets.

There are some Strats and Teles by Fender or Squier you'll play that have absolutely no fret buzz problems at all, while other same-brand guitars - even the expensive ones mind you - buzz all over the place.

Why is this? Well, I'll list off the obvious and non-obvious reasons why a Fender or Squier neck will buzz out on you.

If the neck relief isn't set properly, the strings will buzz like crazy. Check your neck relief to make sure it's proper. If you have absolutely no idea how to align a truss rod, head over to your local guitar store and have the in-store guitar tech do it. It's not expensive.

Bridge saddles are set too low

If the truss rod is properly aligned and you're still getting fret buzz, raise the saddles slightly and this may cure the problem.

Note: You can have both the truss rod and the saddles set up properly at the same time if you have an on-site guitar tech do it in the guitar store. In fact it's usually a good idea to have the tech do both at the same time, and he won't charge you any extra for it.

Pickups are raised too high

This is an easy one you can do yourself. Pickups that are raised very high can cause string buzz. Grab a screwdriver, lower your pickups a few turns and the buzz may go away.

REMEMBER: Standard Strat and Tele pickups are low-output by nature, and while raising them does increase output volume, the drawback is that you may get string buzz because of that. If the output is too low for your liking after you lower your pickups, consider getting a BOSS CS-3 Compression Sustainer pedal to compensate for that.

With Strats and Teles you either have bent steel saddles, Telecaster-style two-strings-per-saddle (usually made of brass) or modern block saddles.

Here's a few links to some guitars and some images so you can actually see what I'm talking about:

The Squier Bullet Strat
has block saddles on it.

The Mexican-made Fender Standard Stratocaster
has bent steel saddles on it.

The Squier Classic Vibe Telecaster '50s
has Telecaster-style two-strings-per-saddle saddles on it.

From a top-down view, you may not see the difference between the block and bent steel, but trust me, they're very different. 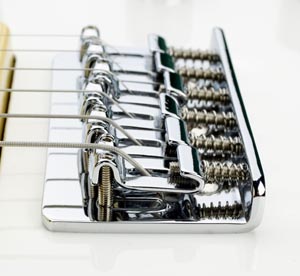 Side view of bent steel saddles

Side view close-up of block saddle

The least-buzz-prone saddle type is block.

Why is the block saddle better for fret buzz prevention? Because you can raise them higher than bent steel saddles. If you look at the top of a bent steel saddle where the "hump" is that the string rests on, once you raise the saddle as high as the screw length is, you can go no further because the screw will fall out. With a block saddle you have extra vertical mass for the screw to go through and can therefore raise the saddle much higher if you need to.

In plain English: With block saddles you will never have to set them super-high because you have a lot of vertical height adjustment at your disposal. But with bent steel, on some Strats and Teles you may wish you had just a few more millimeters of vertical adjustment to kill fret buzz, should your Strat or Tele be buzz-prone.

Bridge is set too flush to the body

This only applies to Stratocaster type guitars.

If you take off the rear plate of your Strat, you'll see a tremolo block, 3 to 5 springs connected to that block on one side, the other side with hoops that are hooked to the tremolo claw, and two screws connecting that claw to the body. 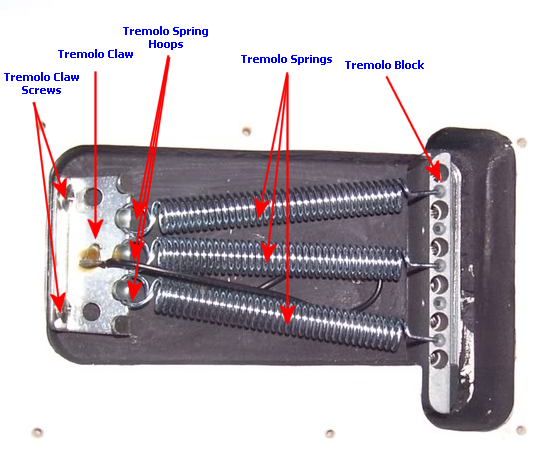 (Note: The tremolo claw is called a claw because the 5 flaps where the spring hoops go around are bent back on purpose in claw-like style so those hoops stay put.)

The part to pay attention to is the tremolo claw screws on the far left. Those two big screws control how much "float" the bridge has on a Stratocaster.

In the above image, the screws are screwed in as far as they can go, causing the bridge to be very tightly flushed against the body. 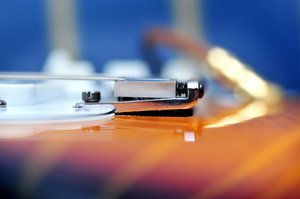 Notice how the BACK of the bridge is not touching the body and is hovering instead. That's the "float", and it does that because your tremolo claw screws are screwed in using a SHALLOW depth, and the combination of the shallow depth and the springs is what's used to control how much or little float you have.

Most Strat players - including myself - don't prefer a floating bridge because it's a bitch to keep in tune.

However, having tremolo claw screws that are screwed in too deep can cause string buzz.

You can cure this problem by loosening your tremolo claw screws to where the bridge just starts to float - and I mean barely. That tiny amount of float may adjust the angle of the string over the saddle just enough to cure string buzz problems.

You'll have to experiment to see how much or little you need to loosen your tremolo claw screws before your bridge starts to float a tiny bit.

And remember: Any time you adjust your tremolo claw screws, you'll probably have to adjust your saddle heights and possibly readjust your intonation slightly as well. When you adjust how much the bridge floats, your strings will probably go wildly out of tune and buzz all over the place at first. That's totally normal. Adjust what you need to and hopefully the buzz problems will go away.

"I've done all the crap above and I still get fret buzz. What can I do?"

Let's say for the moment you did every single thing above. You took your guitar to a tech, who adjusted the neck relief and saddles properly. Then you lowered your pickups, switched out to block saddles and adjusted your bridge to have a tiny amount of float...

...but the damned thing still has fret buzz.

You basically have two more options at this point.

1. Have a luthier perform a fret leveling

This isn't cheap to have this service done, and you'll be without your guitar for a while because it's a slow job. There's also the huge risk that your guitar will play like a completely different instrument when you get it back - and it may not be something you like. In other words, a fret leveling may ruin how the guitar plays when in your hands. Sure, the frets will be perfectly leveled, but the leveling may take away the character of the guitar.

A guitar tech can do this, and it's an easy job. In addition, if the strings rest too high when sitting in the nut, this can be adjusted by filing away excess (it's suggested to have the tech do that) until you get them to the height you feel comfortable with.

Changing the nut fortunately doesn't change the playing characteristic of the guitar, but it may change other things, such as sustain of the string. And yes, there is such a thing as "too much sustain".

My suggestion if considering a nut change is this: If you're totally happy with the way your guitar plays and sounds but you're buzzing out like crazy and think installing a new nut will cure the problem, seek out a nut material that is exactly the same as what you have right now so there will be no surprises.

"I have a 'perfect Strat (or Tele)' that was set up professionally. Everything is correct, and there is absolutely nothing else I can have fixed, modified or replaced on my guitar - yet I'm still getting fret buzz. What now?"

This is where the bitter truth hurts.

Some Strats and Teles will naturally have necks with fret buzz and there's not a damned thing you can do about it simply because of how certain Fender electric guitar necks are made.

Fender and Squier necks are curvy by design. Vintage spec is a "V" or "soft V" shape (the back of the neck has a bit of a point to it in the center line) with a 7.25-inch radius fretboard, and modern spec is a "C" shape (the back of the neck is rounded more like the shape of a letter C) with a flatter 9.5-inch radius fretboard. These designs are for all intents and purposes the roundest necks you could play...

...and rounder necks sometimes gets a bit buzzy on the frets; that's just the way it is.

I'm sure some of you out there have picked up an expensive (as in the over-$1,200 range) Strat or Tele in the guitar store, strummed a few chords, heard string buzz and then shook your head in disbelief. You probably thought, "How can something this expensive buzz like that?" Chances are pretty good that expensive Fender axe was properly set up, and the fret buzz it makes is just part of what the guitar is supposed to play like.

For example, a new Fender American Vintage '57 Stratocaster built to total vintage spec with the soft V-shape neck, 7.25-inch radius, bent steel saddles and smaller frets like they made in the old days will probably buzz out like crazy. And it's also probably true the cheap-as-hell Squier Bullet Strat with the modern C-shape neck, 9.5-inch radius, block saddles and medium jumbo frets will buzz a lot less, if at all.

Does this mean the cheap-ass Bullet is better than the '57? No. But it does mean that modern Strat dimensions mated with modern hardware is sometimes the better choice for you, the player.

Strats and Teles are not "automatic" guitars and never have been

On a final note, I know for a fact that Strats and Teles can be challenging to get a good sound out of. Nothing about either guitar is "automatic", and you have to really work at it to wrangle a good tone out of them.

What I'm saying here is that Strats and Teles are quirky by nature; this is why whenever a heavy metal player picks up a traditional 3-single-coil Strat or two-single-coil Tele, he'll play it for a few moments and then say, "This guitar plays and sounds like crap. I hate it." The reason the metal dude says that is because Strats and Teles are totally out of his element. If the guy is totally used to playing super-low-action Ibanez RG guitars with super-flat fretboards and pickups with super-hot output, of course he'll hate the Strat and Tele. He'll encounter a little bit of fret buzz and instantly judge the guitar to be a complete piece of crap because of that...

...and that's okay. Some guys and gals just don't like Fenders and Squiers. But there are others like myself that like the personality of Fender design. Once you come to understand the beast that is Fender design, you start to enjoy the guitars they make a whole lot more.