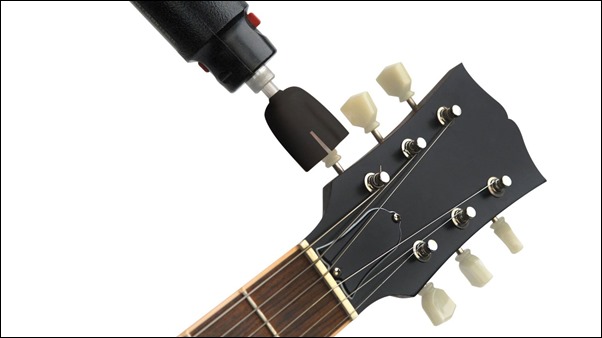 Using one of these can quickly lead to disaster if used incorrectly.

The drill bit peg winder is a real thing and you can buy one right now if you want to as it is cheap, and if you do, there are a few things you need to know about using one of these things.

You must use a drill that can operate at a SLOW speed.

If you try to use a drill on high speed to wind a guitar string with using this bit, you're an idiot. You can seriously damage your guitar in multiple ways by doing that.

You must use something lightweight.

Don't use a full size drill. Use a simple, lightweight, battery powered screwdriver such as the Black & Decker AS6NG. Small, cheap, light in the hand and easy to move around, especially when using on tuners that are both sides of a guitar headstock. Yes, this is a very basic cordless screwdriver that runs at a slow speed - which is exactly what you need here.

An example of what not to use would be the Black & Decker LDX120C. Great drill, but totally inappropriate for use with a peg winder bit. Too big, too heavy.

You still have to perform the first loop by hand.

The drill can't do everything. Don't grab it until you have the first string loop feed through the tuner. Specifically, I mean the string is fed through where one entire revolution has been completed, and the string is resting on the post under the first loop and ready for the next so it winds correctly when you apply the powered drill.

No matter how much one would like the drill be able to do everything, it can't. You will still have to feed in that first loop by hand and there's just no way around that.

"What about the Ernie Ball Power Peg Pro?"

This tool totally works, but I only have one problem with it. It's more expensive than the bit and Black & Decker AS6NG combined.

But then again, it is cheap and totally qualifies as one-tool solution with no parts to lose since it's all one piece. For some of you, that's the perfect tool for the job.