I definitely see a future collectible here, while at the same time being a great player's guitar.

Those who know my opinions on guitars know I don't like gold hardware simply for the reason that the gold rubs off with regular play of the instrument...

...but I make an exception because the Epiphone "1955" Les Paul Custom just looks so damned good.

These are the things that make this guitar awesome:

This is, for all intents and purposes, a totally "fully loaded gold" Les Paul Custom. All the bases have been covered with this one and Epiphone did not skimp on anything.

I really mean it when I say this is one seriously good looker of a Les Paul. 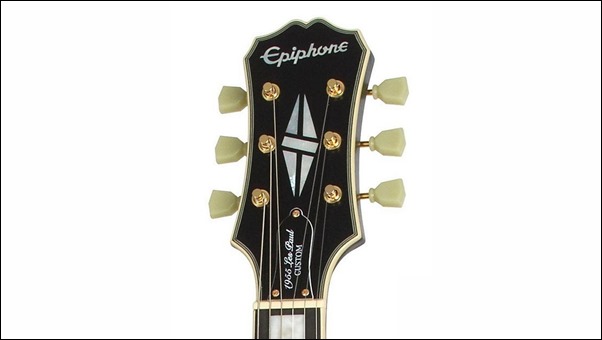 Good players guitar? Also a yes, but there are three things to note here.

First is something I already mentioned. The gold will rub off with regular play. Specifically, it will rub off in the upper area of the bridge and the stop tailpiece where the player's wrist rests when playing.

And no, there is absolutely nothing you can do to stop the rub-off other than not play it. But that's no fun.

There is however a nice part to the gold rubbing off from playing this guitar. It is genuine player wear and it does look cool when it happens.

Second are the tuners. These are the old-style gears with the "tulip" buttons on top, and it is totally period correct for a '55 inspired style. The downside to this is that the gears are nowhere near as good as a set of metal Grover Rotomatics. It can arguably be said that the absolute best set of tuners you could put on a Les Paul is a set of Grovers.

HOWEVER... there are Grovers in gold that would totally work on the '55 Epi Les Paul Custom. Yes, they exist. You'll even see from that link that there's even a tulip-shaped button version.

The third thing to note is that this Paul has a flatter-than-usual 14" fingerboard radius. The normal radius is a rounder 12". Although I can't confirm this for certain, I don't believe there is any drastic difference on this particular Paul for having a 14" fingerboard radius instead of a 12" due to the fact it uses medium jumbo and not jumbo frets. The neck shape is reported to be a C and not a D. That paired with with 14" radius should make for a very comfortable playing neck.

In the end, the "1955" Epi Les Paul Custom is a damned fine guitar. I rate it as an instant collectible and also a genuinely good player's instrument.

On a final note, this is one of the rarer instances where an import Epi Les Paul is actually worth its price tag. All the binding is there, all the gold is there, all the things that make it a true Les Paul Custom model are there and accounted for. The guitar is missing nothing.