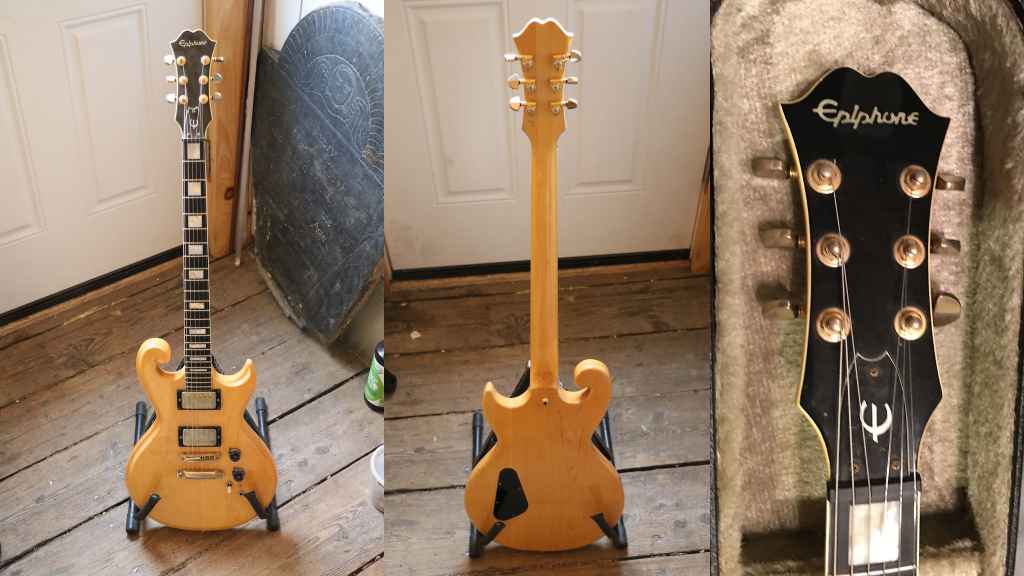 An Epiphone made in Japan with a German carve, scroll and a 24-fret 25.5" scale neck? Oh yes, this happened.

Odds are you have never seen one of these in person (above photos are from this listing), and that's because this guitar was made in the 1970s for just four years, 1976 to 1979. It is Epiphone branded, but the Japanese company who built the guitar was the Matsumoku company. In addition to some Epiphone guitars, they also made guitars for several other brands. Some examples are the Aria Pro II TS-600, a whole bunch of Greco guitars, some Vantage, some Washburn and several others. Matsumoku was a busy company back in the day with their woodworking...

...but this Epiphone really stands out. You want bold and different? You want an SC-550. See current listings here if you want one (or just want to know the price).

The design is the first thing you see, so let's talk about that first.

It does look like a guitar that would fit perfectly within an orchestra setting or Renaissance Fair, and has that "before 20th century" feel, so to speak. The skinny headstock, while looking slightly weird, does complement that top horn. The gold plated hardware does work well with the natural finish, where you can see wood grain easily. The fingerboard is dark and the block inlays offer some very nice contrast.

And the scroll. Yeah, that thing. Said honestly, it doesn't look garish. I sort of like it, but am certainly not in love with it.

Nothing about this Epiphone says "I'm from the '70s" at all, which is a very good thing. Does that make the design timeless?

Concerning the color options, the only two available were Natural and Ebony. I think Natural is the better choice.

Supposedly, there was an original option where certain models have Gibson humbuckers in them. The only way to know that for sure by model name is if it had -G at the end. Natural had a model name of SC-550N-G, and Ebony was SC-550B-G. Did that make any difference at all in the tone? No idea. But it's probably true those are the most prized models given the Gibson humbuckers used were quite upscale (they had gold plated pole pieces and were copper-wrapped, very highfalutin stuff!)

Lastly, what does "SC" mean in the model name? Scroll, of course.