Everything you ever wanted to know about electric bass guitar strings 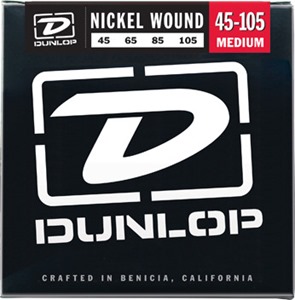 Above is a set of strings I just bought that will be coming in the mail soon, the Dunlop DBN45105 bass string set, as in a 4-string set. I figured that since I use nothing but Dunlop DEN0942 strings on my Jazzmaster and am very happy with those, maybe the bass strings will be good too.

I play both guitar and bass, but for the longest time I knew nothing about how to pick the right bass string, so I figured I'd write up a quick guide on that.

If you want the most usable, predictable bass sound, use a 4-string long scale bass. And what that basically means is to use a bass that has a "Fender standard scale length," which is 34 inches.

Don't worry, the vast majority of electric bass guitars use a 34-inch scale. Any bass that is short scale will make that fact known usually right in the model name, and kid-sized 3/4-scale bass guitars can be spotted easily just by looking at them.

If you want to do the 5-string or 6-string thing, go ahead. But you'll hate that low B sound, because more often than not, that low B is being used on a 34-inch scale length and the string flops around too much due to lack of proper tension, hence the farty tone.

A 5-string bass that has a much better low B sound is the Schecter Stiletto Studio 5 because it has a 35-inch scale length. That extra inch really does make a difference where the low B is concerned, and the nice part is that it's not some crazy-long neck either, so it is a comfortable player. A 6-string version is also available.

There are three. Roundwound, "half-round," and flatwound.

A roundwound string has a wrap where you can feel the grooves in the string as you move from fret to fret. It's the noisiest string, but the cheapest and the most common.

Half-round is a D'Addario thing. It's a semi-compressed string where the wrap has been ground down slightly, making it easier to move from fret to fret. Feels sort of like a flatwound, but sounds like a roundwound... somewhat. Also, for some strange reason, the string feels sticky when new from some kind of coating D'Addario puts on the Half-Round string. It eventually goes away once you play the strings enough, but it just feels weird.

Flatwound is a compressed string where you don't feel the string wrap grooves at all. And unless described as a low tension string (a relatively new thing at the time I write this,) it will be the tightest bass string you ever use. But at the same time, it's the smoothest-feeling string.

Stainless feels rough to the touch because it's a harder steel compared to nickel, but you get the most bass tone "punch." For playing heavy metal music with a pick, a stainless string set will cut through the mix very nicely. For funk and slap, stainless is also really good for that.

With nickel, there isn't as much treble attack as stainless, but it's a lot better for finger-style play where the goal is to have a sound that's not so in-your-face. They're also a lot easier on the fingers.

Something a lot of bass players do is use a stainless set and purposely play them until the string is "dead," resulting in a sound that has the attack but not the biting treble on top of it, so to speak. The only way to get this sound is to use stainless and just play, play, play and play until the strings deaden out.

What's the easiest bass string to get along with?

These strings are cheap (around $15 to $20 for a set of 4,) readily available, have a softer feel so they don't wreck your fingers as much, bends easier than stainless or flatwound, aren't as noisy as stainless (again, from nickel being softer,) and you have more brand choices.

Yes, you will have to change out these strings more often than you would a stainless or flatwound set, but since the cost of them is cheap, you won't mind it too much.