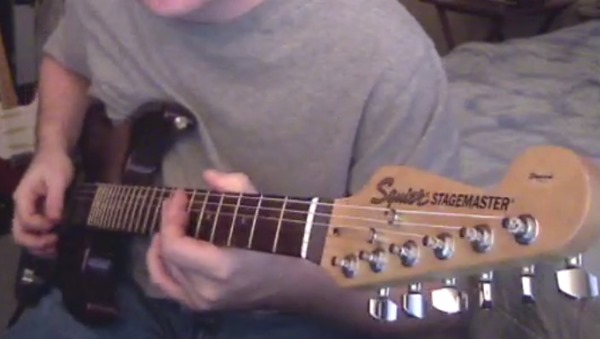 Yes, that is me in the photo above with a Squier Stagemaster. Sometimes I regret the fact I traded out this guitar.

Two of the coolest guitars with seriously good build quality to them are the Squier Stagemaster and Squier Showmaster. They feature things usually seen on expensive Fender models, such as two-post bridges, Floyd-Rose systems on some, premium grade sealed tuners, high-fret-access neck and so on. Even the paint is premium grade on these things.

The first question you probably have is why I got rid of mine. It's because ultimately, I'm not a humbucker guy. I'm a single-coil guy. And I happen to play the Squier with the biggest single-coils available, the Jazzmaster. That's my thing...

...but your thing may be humbuckers. And if so, both the Stagemaster and the Showmaster fit the bill very nicely.

As a true workhorse cheap rocker guitar, you can't really get any better than one of these. Flatter fingerboard radius at 12.6-inch if I remember correctly, seriously cool looking reverse headstock (some painted, some not,) premium grade parts throughout and it's just a solid build all around. With very little setup, the Stagemaster/Showmaster is a gig-ready/stage-ready guitar. Well, most of them are.

The only ones that require some work are ones that have the Floyd-Rose in them. It's probably true you'll have to get a new Floyd installed, being the guitar is over 10 years old. But given how cheap these things sell for, you'll have plenty of cash left over to get one.

Why do Stagemasters and Showmasters sell for so cheap?

You'd think that a premium-grade build guitar would sell for a lot more, but these don't.

Squier brand. I'm not kidding. The only reason these don't sell for more is because Squier is on the headstock.

What's the difference between the Showmaster and the Stagemaster?

Showmasters typically have an HH layout with no vibrato system.

Stagemasters typically have an HSH layout with a Floyd-Rose style vibrato system.

But then there are the oddball models where a Showmaster will have an HSH with Floyd, and a Stagemaster like the one I had will be an HSS hardtail.

In other words, shop both models and just pick out the configuration you like best, as the all have the reverse headstock neck with the 12.6-inch fingerboard radius. The neck is a bit flatter than the typical Fender feel, sort of like Gibson/Epiphone with a longer 25.5-inch scale length.

Here's me playing my former Stagemaster, all stock. Great tone.