Experimentation with a floating bridge on a cheap Squier Strat 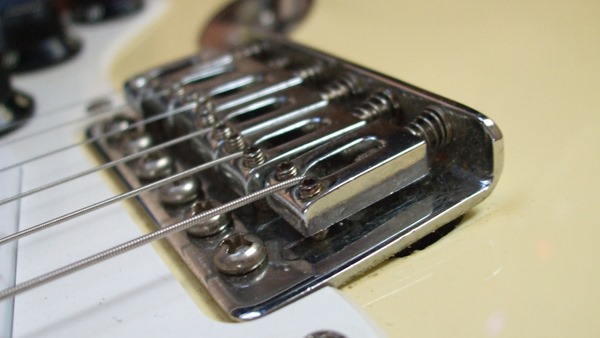 Above is a guitar that long time followers of mine know as Banana, the 2010 Squier Bullet Strat in Arctic White. Why is she called Banana? Because the Arctic White that Squier puts on that particular guitar is nowhere near white. It's decidedly more yellow, as in banana-colored, hence why the guitar is called Banana.

I took the guitar out of its gig bag today. The neck was back-bowed a bit from not being played in a while. A few turns of the truss rod fixed that right up.

Yes, the guitar is slightly dirty at the bridge, but that's only because of something I did to it today. I adjusted the bridge so now it floats.

My reason for doing this yet again was that I had the thought of how I use a vibrato bar. On the Jazzmaster I use slow movements and barely bend it to make it do what it does. It came to mind that if I float the Strat bridge, I could get a similar effect as long as I'm really light on the bar.

Did it work? In fact, yeah it did. My Jazzmaster playing has "trained" me in such a way where I can now use a Strat's vibrato system, which Fender incorrectly calls tremolo on the Stratocaster guitar, and get that slow-style vibrato while keeping the strings in tune.

As for the dirt seen in the photo, that's gunk that was trapped under the bridge when I had it decked. On the next string change I'll run a rag under there and clean it out proper.

Using the vibrato bar on a Strat is weird

Almost nobody uses the vibrato bar a.k.a. whammy bar on a Strat because it makes the strings go out-of-tune so easily. But it's my feeling most people don't know how to use a vibrato bar properly.

As I said above, the Jazzmaster taught me how to use vibrato the right way. I can't explain that in words other than saying that when you use vibrato on a Jaguar or a Jazzmaster and play on one of those for a while, only then do you truly understand how a floating vibrato system is supposed to work.

A Floyd-Rose system does not teach you how to use vibrato on a Strat, for the reason the Floyd is a locking system and the Strat is open where no part of the string is locked down anywhere.

Actually using the vibrato bar on a Strat is a weird experience because I never played with one on a regular basis before. But I think I might leave it on and try it out for a while.

Yes, it is possible to use the vibrato bar on a Squier and have it keep in tune, or at least possible when the bridge is set to float and you use it lightly.