Lots of players see the classic full stack setup and want it really bad for basically no other reason than it looks cool - which of course is the worst reason in the world to actually buy this type of rig.

The full stack rig is huge, bulky, heavy, inconvenient and most of the time is not the loudest setup unless you run it in a very specific way.

The deal with a full stack setup is this: If you're only running one amplifier head as shown above, that power is distributed across 8 speakers. So in effect, you're only delivering a maximum of 12.5 watts to each 25-watt speaker.

Sure, you'll see a very "bassy" sound out of driving 8 speakers, but in reality it's really not going to project that far.

Fact: Most guys on stage who run full stacks only run the top half. The top half of the stack is raised so it can be heard easier (your ears are at your head and not your feet), and when running a 100-watt head through a single 4x12 cabinet instead of two, most of the time it actually will be louder.

Yes, this does mean some guys use a bottom cabinet just as a stand for the top cabinet.

It also means that if you're running a half stack setup, raising the cabinet does wonders. See below. 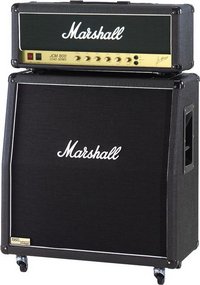 This is, without question, the best "big rig" setup you can own because it can basically handle almost any environment you'd play in (unless it's an arena where you'd actually need multiple rows of full stacks).

For any house party, bar or club you play in, the half stack works just fine and in fact is a little bit of overkill. It's very unlikely you'd ever half to turn up the volume past 6 with a rig like this.

The only problem with half stack rigs is that like the full stack, it's bulky. Even with the casters on the bottom, getting that cabinet in and out of a van or truck is just plain annoying and more often than not is a two-man job. 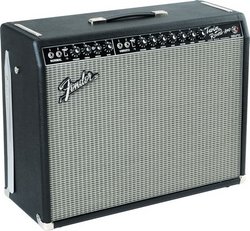 This is the amp most players choose to go with for several reasons.

First, you don't need two guys just to move this thing. It's heavy, but not so heavy that you can't move it yourself.

Second, it can handle house parties and small clubs easily. In a club, the amp can be miked to the house PA system, or if there's no PA you can raise it a few feet (again, milk crates work well for that) and it will project properly.

Third, generally speaking the combo will outlast separated heads and cabinets because the head isn't being banged around independently. Amplifier heads take abuse and that's just the way it is. With the combo, the likelihood of the head getting damaged is significantly decreased because it's actually part of the cabinet.

The only real drawback with a combo amp is that it doesn't have as much bass response compared to a 4x12 cabinet because of the smaller size and fewer speakers. However this is an acceptable tradeoff being that you can actually move this thing on your own and fit it into just about any car (meaning you don't need a truck or a van).

Stacks may look cool and project well, but the combo is ultimately more convenient and usually has all the volume you'd ever need for most situations.