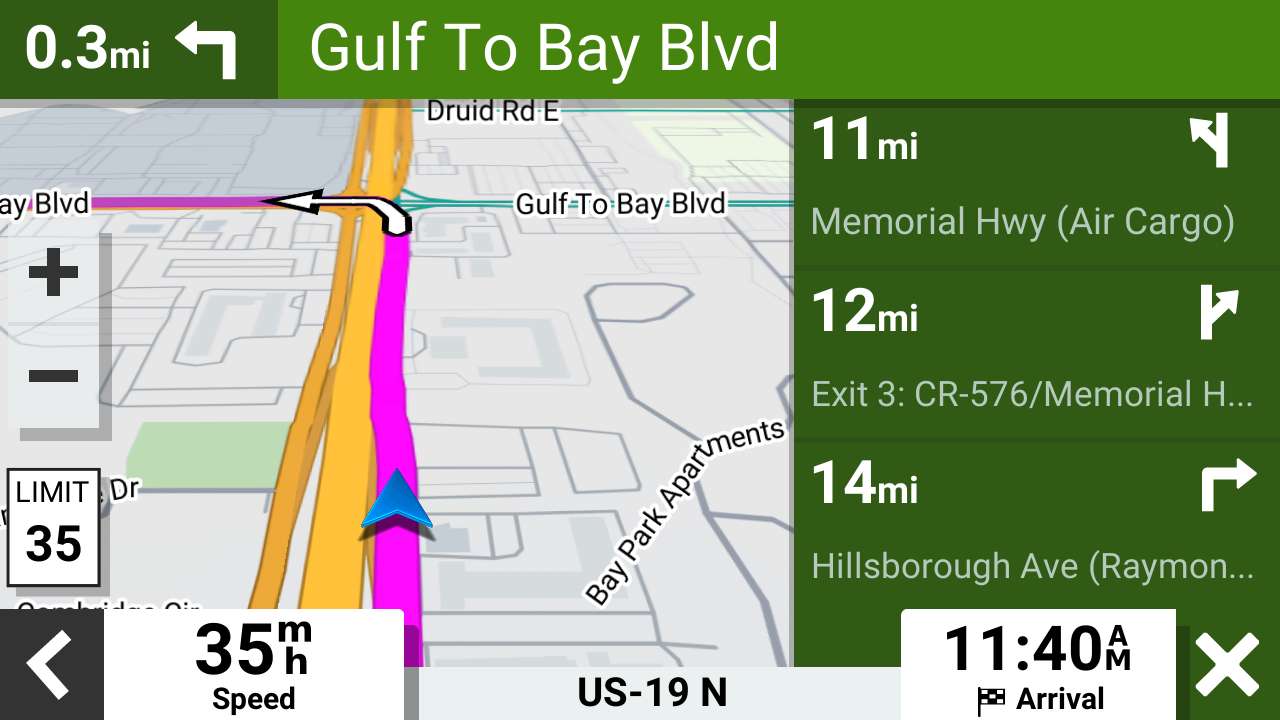 It was worth getting this.

In September '22 I bought a new Garmin DriveSmart 66. I liked this model enough to where I bought a second one refurb model for backup off eBay for 44% less.

Do both work? Yes. Do they work well? Yes.

After four months of use, my DS66 still works fine, although I know enough about Garmin automotive navigators to where I know the unofficial rules of using one of these things.

Rule #1 is powering off the unit fully when done driving for the day. You turn the car off and the screen blanks out, giving the appearance it's turned off, but it's not. Over time, what this does is drain the battery completely. You start the car one day and the Garmin won't turn on, so you think it's broken. It's not. All you have to do is that while your car is on and power connected to the Garmin, press and hold the power button until the screen comes on again, problem solved... BUT... the proper the workaround is to fully power the Garmin off. Before you turn the car off, press and hold the power button on the Garmin until a message pop up on the screen asking if you want to power off the device: 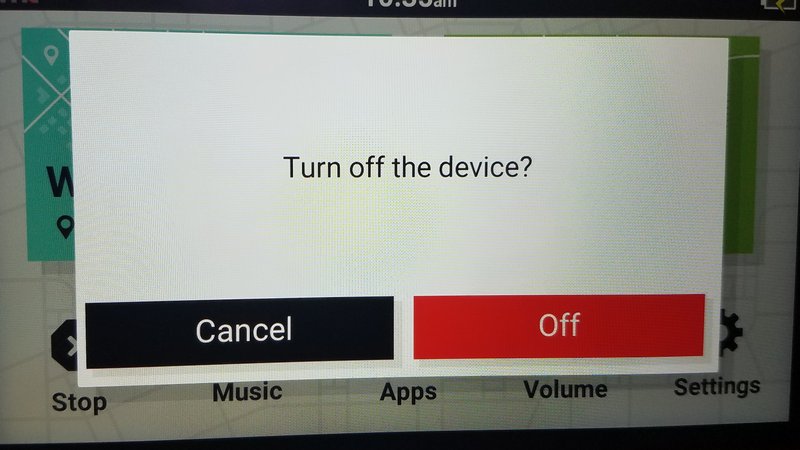 ...and power it off that way. Do you have to do this every time you leave the car? No. It's only necessary if it's going to be more than 3 hours before you start driving again.

Rule #2 is avoid overheating while off. This means keep it out of the sun when parked. Either cover the screen with a microfiber cloth so it absorbs the heat instead of the unit itself, or just taking the unit off its mount and putting it in the glove box or some other place where the sun isn't beating on it.

Rule #3 is avoiding overheating while on. I use this Arkon mount to place my DS66 over a vent. On hotter days I will run either just air or air conditioning to keep it cooled off.

Were I using a smartphone for navigation, I'd still have to follow rules 2 and 3 because there's just no way around that.

Is the DS66 navigation good?

Yes, but that brings up another rule for any navigation system, be it Garmin, phone or otherwise.

More often than not I can punch in or speak a destination to the DS66, and the route it gives me is usually best way to get there.

Sometimes the DS66 gives me oddball routes, although not that often. If I do notice something weird in the route it gives me, I use the detour function to get around a specific section, or, avoid the weird part of the route myself once I encounter it and let the DS66 auto-recalculate.

There is something I have learned the hard way. When the DS66 calculates a route to a place I've been to many times before using a totally different way than usual, there's a reason for that. It's avoiding traffic. I have had it happen where I ignored the DS66's suggested directions, went the way I thought was better and uh-oh, traffic. I'd come upon the traffic and then realize, "Oh. Now I know why it was telling me to go a different way. Oops."

This doesn't mean I always use the route the DS66 suggests. There are times when I know my way is better, and other times when the DS66 knows the better way.

I'll give an example of when I go my way. When the DS66 says to take a specific highway exit, and on approach of that exit I see the ramp all backed up with cars, I won't take it and just use the next one.

An example of when the DS66's instructions are better is for just about any traffic alert. For major traffic events, the DS66 auto-recalculates around it. Sometimes it's a long way around. I'm okay with that. Better to take the long way around and be moving instead of stuck in gridlock traffic and stopped.

Is the DS66 reliable?

The only complaints I have are two annoyances. The touchscreen is a little over-sensitive and there's some menu choppiness when entering locations. Maybe this will be fixed with a software update in the future.

Something I've been doing ever since I started using Garmin nuvi models in the mid-2000s is using GPS coordinates whenever I need to get to a very specific place. What I'm about to describe is something I would do even if I were using phone navigation.

Addresses and POI (Point Of Interest) locations are usually correct. However, if the destination is a place where I need to be led to a very specific spot, that's when I use GPS coordinates instead.

An example of this would be a specific entrance at a large shopping mall because that spot does not have an address or even a name, so using coordinates is required. 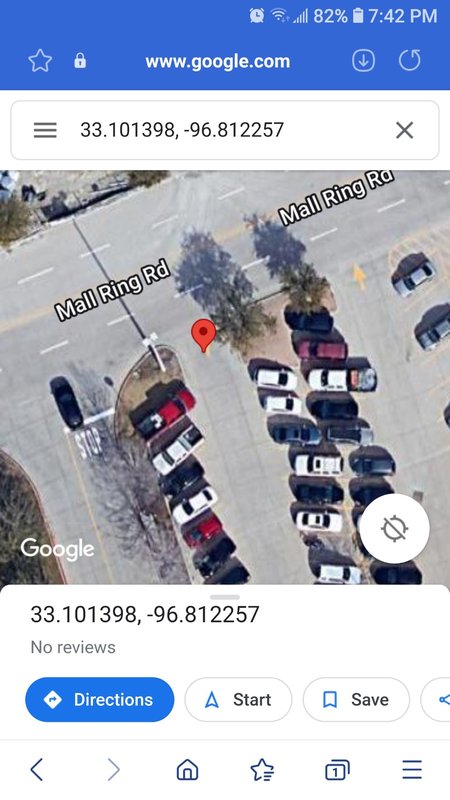 I take those coordinates, input that into the DS66 and I will be navigated exactly to that spot, which is exactly what I want. Also, if it's a place I intend on returning to later, saving that location is easy on the DS66 and I can name it whatever I want. Since the favorite is saved direct to the DS66 and not the phone, I don't have to do any of that login/authenticate/sync stuff. I just turn on the DS66, find the saved spot in Saved and go.

Would I be better off using Google Maps? No, because again, locations like the one above can't be found by name nor address. Regardless of map system used, navigating to a very specific spot requires direct GPS coordinates input.

Better than the older Garmin models?

I have to get a physical size thing out of the way first before answering this.

The single most annoying thing about the 55/65 are the always-there favorites icons on the map that cannot be hidden. Those infuriating ugly green heart icons are gone and off the map on the 66.

There are some things about the 66 that are annoying to some, but I personally don't consider them annoyances.

Some of these choices I understand while others were bad decisions.

"Shorter Distance" more often than not really didn't work in your favor, especially when combined with other set avoidances that would result in route calculations taking a really long time. You can basically get the same type of route just by using "avoid highways" or by tapping the double-arrow icon for any destination to show an alternative route.

I definitely understand the reason why the tollway question was removed, because that reduces driver distraction, and I'll tell you exactly where - while driving. I turned off the tollway question on my older Garmin models because if I had to take a detour, I did not want the GPS asking me if I wanted to take toll roads or not on recalculation. All I wanted was to get back on track without any manual confirmation of the route. Having the tollway as always-on or always-off available from a submenu was the right thing to do.

The elimination of sorting points of a route based on distance didn't affect me, but really ticked off delivery drivers. That was a feature they really liked that they used often. The Drive 52 and DriveSmart 55/65 were the last to have it as far as I'm aware.

Removing the ability to request a detour by a voice command was dumb on Garmin's part and should be put back. Requesting a detour at bare minimum requires 4 taps (from map: Menu > Edit Route > Detour by Distance > Avoid Next X miles). If you have Trip Data fields or the Turns list enabled, then it's 5 taps because you have to close Trip Data or Turns first.

As for using USB-C now, my only complaint is that Garmin didn't do this sooner. This means that presently, replacement power blocks and Garmin-specific USB-C cables aren't exactly plentiful. Available, yes, but not plentiful. This isn't a problem for me personally since I have two DS66's, meaning I have a backup block and cord. For others that just get one, yes the block and cord provided are of good material and should last for years. I'm the crazy dude who just has to have backups just in case, even if I never use them.

The DS66 delivered what I wanted

What I needed and got with the DS66 is a rock solid navigator that does not drop signal and gets all its position and traffic info using no phone data connection whatsoever. Yes, I can connect my phone to it optionally to get additional goodies and info using the Garmin Drive app (including traffic cameras), but it's not required.

My DS66 is still working fine 4 months later. Is it perfect? No, but it works like it's supposed to, which is all I can ask of it.