Garmin i3 upgrade of sorts 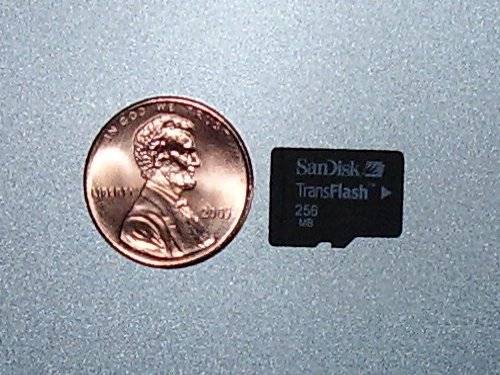 I will be taking a really long trip pretty soon but found that my Garmin StreetPilot i3 could not fit all the states (as in state travel data) I would be traveling through. The i3 comes stock with a 128MB TransFlash card made by SanDisk. Normally these tiny little cards are meant for cell phone use, but they're also the primary means of data storage on the i3.

Granted, I will have my laptop with me which means I can load in extra states along the way via the DVD and USB, but who wants to go through that crap? I didn't.

Before I continue: Most people would probably never run into the problem of the i3 running out of data storage. For my particular needs I had to do something about it.

So I went out and bought a 256MB SanDisk Transflash card. They were available at Circuit City fortunately. Price with tax: About forty-two bucks. Not bad. Definitely worth the upgrade. I wanted a 512MB card but there was a two-week wait time. Maybe later I'll get the 512. Either that or I'll get the c340 which does not require any downloading whatsoever (but in the same token is twice the price of the i3).

The install of the Transflash card was super-easy. Click in, click out, vice-versa. That's it. The card is located on the side of the i3 by the way, it's in plain sight. When you boot the i3 afterwards it tells you it needs map data (obviously since the card was blank). Fortunately I did not lose any of my "favorites" I set in the unit - that was stored internally which was cool. I popped in the map DVD into my laptop, USB'd my i3 and loaded up the data. Took about ten minutes. Very easy all the way through.

To anyone who might perform this upgrade, the card is really, really tiny and really easy to lose when not in the i3. Make sure when you do the upgrade (if you have to) to do it in a room with plenty of light in case you drop the card accidentally, else you'll never find it. 😉