Yesterday I acquired a brandy new Garmin nüvi 270. This is identical in every way to the the nüvi 200 save for the fact it has transatlantic maps. I'll put it to you this way: If you put the two side by side you couldn't tell them apart unless you specifically looked at the bottom for the model number.

As with every new Garmin GPS unit I acquire I do a personal review on it, so here's the poop on that.

If you see something green that means I like it. If you see red, I don't like it.

Slower than other Garmin GPS units I've had, but I think the reason is because it does a system check of both the North America and Europe map data sets on startup. This isn't a really big deal per sé but I do notice it.

I would bet the nüvi 200 would boot faster than the 270 solely because it only has the lower 48 United States, Hawaii and Puerto Rico for map data so it doesn't have to check as much on system startup.

Fastest I've ever seen - even faster than my previous StreetPilot c580 (and that unit is quick on signal acquisition to begin with).

Fastest to date I've experienced with a Garmin GPS unit. There are times when it calculates so fast you don't even see the "Calculating" notice at the top of the screen.

If you miss a turn, the recalculation of routes is also just as fast.

Truly daylight readable and the fonts can be read easier from a distance compared to older StreetPilot units. The touch responsiveness is decent.

At night this screen is also a lot easier on the eyes compared to StreetPilot screens. With the StreetPilot at night, no matter what you set the brightness to it was either too bright or too dark. The nüvi screen is "just right" once you find a brightness you like (which isn't difficult).

Chintzy monophonic speaker that sounds "raspy". But then again what can you expect from a unit this slim. Even with the itty bitty speaker it's actually pretty darned loud when you turn the volume up and can definitely cut thru traffic noise.

I had to purposely switch the voice language to "British English" because the "American English" voice just sounds awful on that little speaker.

The attention tone (otherwise known as the "ding" or "bong" sound) is in the nüvi however it only works if you load in custom POIs and mess around with a few settings.

This is the first Garmin GPS unit I've ever used that has the ability to manually enter in coordinates if I want to. Very, very cool. I really like this feature.

The only drawback is that you can't view what the coordinates were once you save a favorite unless you do a quick backtrack to "Recently Found" - but that's okay. The fact I can even use coordinates to begin with is just plain cool.

No way to turn WAAS off

If I were to guess, I think the reason WAAS is on all the time is because this like other nüvi models, this one has a "Pedestrian" mode which simply wouldn't work properly without WAAS enabled.

If you're in a the middle of a route you can tap the top green bar then tap "Show Map". This shows the total distance remaining and total time remaining. I like this.

"Favorites" still lies to you

For every single Garmin GPS unit I've ever owned, the Favorites list outright lies to you concerning how many miles away a destination is and still does.

If you have any Garmin GPS unit, do the following while parked:

Why do Garmins do this?

I have a theory on that.

I'm betting the mileage listings for favorites are done so using nothing but non-calculated routes. It's as if you drew a straight line from point A (where you are) to point B (the destination) on a map completely disregarding all roads and turns.

However, when you instruct the GPS to route you to a destination, you're obviously not going to drive in a straight line - and that's where the extra miles get added on.

Here's a small example of what I'm talking about:

Note the red circle. According to the above, Pop's house is 57.3 miles away from my current position.

But then I calculate the route, tap the arrival time, and... 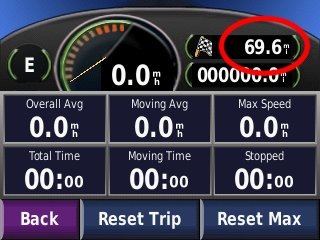 All automotive Garmin GPS units do this to the best of my knowledge, and it's very, very annoying because you can't trust what the mileage listing is in a favorites list. Only after you calculate a route do you get the true distance.

Because of the super-fast calculation times, the 270 is a really solid performer.

I give it a thumbs up overall.