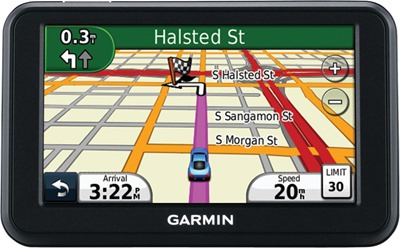 (Note: This article is old, see a more recent article of which older Garmin GPS models to get.)

It's been a little over 3 years since I bought this thing. How has it fared out? Let's talk about that, what the best older nuvi models are, and how to keep the map data current with free stuff.

Currently, I have a nuvi 40LM and a decidedly old StreetPilot i5, which I'll talk about more in a moment. The only thing that's gone wrong with the 40LM is that the power button popped off. However, a quick dab of superglue fixed that right up and it's held ever since. You'd never know it popped off and it was the best superglue job I ever did (I was quite proud of myself because the repair worked so well.) That was about a year ago.

The 40LM still works the same as when I first got it. It rarely complains and I can confirm that it is reliable.

However, being I use GPS so much, I need a proper backup, so here are my adventures with that.

Ye Olde StreetPilot i5 is unfortunately just too old to use

I bought one of these 6 months ago for use as a backup and for nostalgic reasons, given my first Garmin satnav was an i3 and the i5 is very similar to it. The problem is the unit will not support any memory card over 2GB. And since the free OSM maps for the US are now over 3GB uncompressed, I literally cannot upgrade the maps in the i5 anymore.

That was a bummer, so I needed an alternative backup unit that could support more map data. 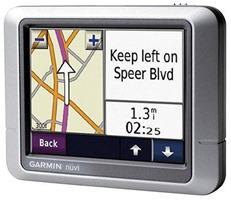 I decided to go ahead and buy a used nuvi 200. The cost was $27.49 exactly. I don't have it yet, but it should arrive in the mail a day or so after I publish this. The going price is between $25 to $30 to get one with mount and bracket, so what I paid was fair.

All 2x0 models have the SiRF chipset in it. That means solid, fast GPS signal acquisition, and that works just as good today as it did back in 2007.

Updating maps for free on a nuvi

An appropriate memory card is required for this. The maximum memory card storage the nuvi 2x0 series can support is 8GB, so the 8GB microSD card w/SD adapter is what's needed.

After that, all it takes is stuffing the memory card full of free OSM map data. Done and done. No need to buy maps.

Why didn't I just buy a new nuvi and make the 40LM a backup?

First, I didn't feel like spending the money on a new one.

Second, they have bugs. Garmin will attend to the bugs and release patches as they always do, but new-model bugs are not something I want to deal with.

Fourth, there's nothing in the newer models that I would find useful.

It's totally true that the older nuvi 200 is a dirt simple satnav, but assuming it works like it should (which I hope it does, given it's used,) it will get the job done in fine style. Should my 40LM fail, the 200 will be there as the backup.

Rich's handy dandy tips for getting along with an older 3.5-inch Garmin satnav

Tip 1. Only use free OSM maps

While it is possible to "borrow" Garmin map data from other units or from a download somewhere (but not here; don't ask,) you are better off using the free OSM maps.

Need a reason? It's updated weekly. Not annually. Not quarterly. Weekly. It doesn't get any more current than that. No, you don't need to update every week. Update whenever you want. The point is that it's nice the map data is updated so often.

To the best of my knowledge, every nuvi has the option to manually enter coordinates when you want to.

Bing Maps is without question the easiest when it comes to getting coordinates. Find a spot on the map, right-click and ta-da, instant coordinate info: 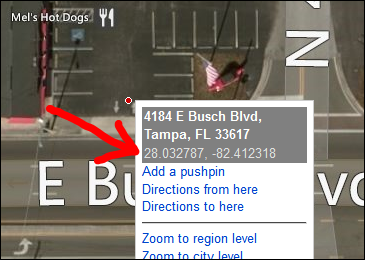 For any instance where a street address can't be mapped, the coordinates can always be mapped.

Using 2D gets more usable (keyword there) map info on the screen and in many instances is easier to read on a 3.5-inch screen.

Tip 4. Update the firmware (only if the battery still holds a charge)

Do a Google search for "Garmin WebUpdater," download that, install it and use to update your old nuvi to the last-released firmware for it. Most nuvi owners never update their firmware. Do so on yours, as it will apply necessary patches. Since you have an older unit, you only have to do it once.

If the battery doesn't hold a charge, see next tip.

Tip 5. If the battery is stone dead and won't hold a charge, replace it

The internal battery on the nuvi is easy to replace and they are readily available and cheap (usually under 9 bucks, depending on model.) There are also plenty of YouTube videos that show you step-by-step how to replace the battery on a nuvi. Just search it on YouTube and you'll find the one for your model. Yes, it's easy once you see how it's done.

You need a battery that can hold a change to perform a firmware update, else you'll brick the nuvi.

It's not that the nuvi can't route a trip over 200 miles. The problem is that over that much distance, you may encounter a signal drop where the nuvi gets "confused," tries to recalculate and locks up.

If you have no choice but to route a distance of over 200mi, the best thing to do is to cycle the nuvi's power every time you take a rest stop. It's probably true you'll stop for a break every 50 to 100 miles or so. When you do, instruct the nuvi to stop routing, power it off, unplug it, plug back in, power back on and reroute. This will almost always cure any GPS satellite weirdness and prevent lock-ups.

Tip 7. If sun glare is too much to deal with, get a shade

GPS shades have been around for a long time now. If the sun prevents you from seeing your satnav's screen properly, shade it. Some older nuvis have backlights that aren't as bright as they used to be, and if you have one like that, the shade is a cheap way to extend the life of your satnav.