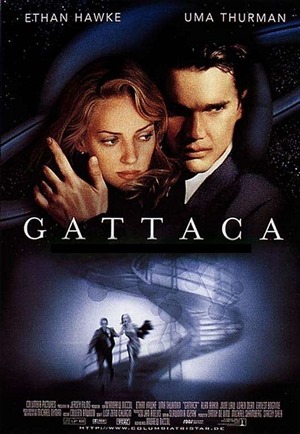 Gattaca is a movie I only watched because there are certain sci-fi movie nerds who say this flick is one of the best ever made.

Is it? Well, here's my take. And yes it was my first time watching it.

First I'll talk about the one thing that dates this movie. Computer keyboards. This may sound like a huge nitpick, but it's not because there are more than a few times when a computer keyboard is in fact a rather important plot device of the storyline to keep it moving along.

The moment I saw the keyboards used, which were of course using full-height keys, I thought to myself, "Yep. Dated." In 1997 when the film was released, yeah, they were modern. But it's 17 years later they are absolutely not and stick out like a sore thumb.

I could totally tell the film tried so hard to conceal anything in it that would make it appear dated later. That attempt was successful, except for the damned keyboards.

Aside from that, Gattaca is about as perfect as it gets. The flow of the storyline is just right. It is easy to follow along while at the same time being a complicated-in-a-good-way plot. The cinematography is top notch stuff. The CGI used, amazingly, does not look dated, even today.

My favorite character is Jerome. As in real Jerome. However, just about everyone in the movie did a stellar job. My only real complaint is with the Detective Hugo character. Out of all characters in the movie he just seemed to come out of left field with his whole crusty gumshoe thing and... it just didn't seem to fit. It worked, yes. But didn't exactly fit.

Is the Gattaca story one that could become real?

No. The film says that it can, but I don't buy it for a second because I can't ever see genetic engineering going that well.

In the back of my mind, all I can see is bureaucratic crapola getting in the way of the human engineering seen in the movie from ever becoming possible.

I'll put it another way. It is much more likely the engineering seen in The Manchurian Candidate would become real first well before the future depicted in Gattaca. And heck, if you want to get really accurate about it, I'd see the dystopic future of American cities depicted in The Running Man happening first before anything else (I suggest watching that, and don't be surprised when you come to the frightening realization that we're really, really close to that happening in certain cities in America).

Yes, damned good. I really was interested in knowing how the story would unfold, and the ending, while bittersweet, was satisfying.

One of the best films ever? I can't say that it is. Definitely above-average, true enough. But not in the class of The Shawshank Redemption as far as cinematic masterpieces are concerned, as there are very few films as good as that one. Believe me, there are reasons why that flick scores a 9+ on IMDb consistently while Gattaca doesn't (although it should be noted it does routinely get high 7's).

In the end, yes, Gattaca is above-average good. It's classified as sci-fi, but I seriously dig the fact the movie mainly concentrates on a really good story that purposely puts the sci-fi stuff as a back seat. Stories are what move films along and not tech. Gattaca's story moves along very well. I liked it.