Gibson Les Paul Standard is a waste of money

The USA Les Paul Standard is one of those things many players think is a magic guitar. It's not and no guitar is. What makes a guitar magical is the player and not the guitar itself. Anyone with half a brain knows this.

There is a distinct "honor" that the USA Paul holds. It tests the boundaries of what regular Joes are willing to pay for a mass-produced electric guitar.

...and that was a huge mistake. It was such a mistake that Guitar Center has deep-discounted the 2013 Standard in Heritage Cherry Sunburst down to $1,849 just to get rid of the overstock in an attempt to clear them out:

The only time GC ever discounts a guitar that deep is either in an introductory promo for a new model, or when they're overstocked with something nobody is buying and are desperate to get rid of it. The '13 Les Paul in HCS is one of the latter.

Gibson officially hit the ceiling with the 2013 price point. They wanted to see how high they could go before people stopped buying the guitar, and well, they found it.

Did the Fender USA Standard Strats get deep-discounted? NOPE. Even though they're overpriced also at $1,200, Fender was at least smart enough to introduce a "Professional" model at just under $1,000: 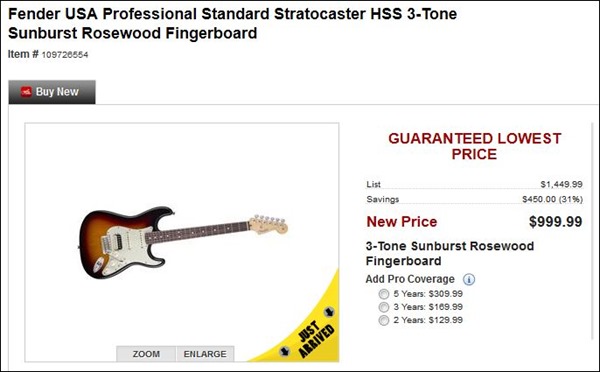 Not exactly the prettiest Strat, but the point is you can in fact buy a USA Standard that isn't a "Special" model for under a grand, even if just barely.

But anyway, let's get back to the Paul.

It's widely known that the build quality of USA-made Gibson Les Paul Standard guitars is awful. They keep churning out turd after turd and charging ridiculous prices for said turds. But like I said above, they did hit the ceiling for what idiot guitar players were willing to pay for a high-priced turd. Even the idiots got enough sense to realize the price was too high.

It is totally normal to walk into any Guitar Center in Tampa Bay and see USA Les Paul guitars hanging on wall with a light layer of dust on them. They are always in stock, and many go unplayed. Any day of the week I can waltz into any GC local to me and play a USA Paul...

...and that's not how it should be. USA Pauls should be rare and not available to play any time I feel like trying one out. But instead I find these overpriced turds with layers of dust on them because nobody can afford the frickin' things. When you see the dust, that literally means nobody has bothered to touch it for a a week. Possibly several weeks.

Take the Squier Vintage Modified Jazzmaster I just bought recently. Those guitars are not easy to find in stores, so it was a special experience to play one, and I bought it. Yes, playing a Squier can be a special thing for a hard-to-find model. That's the feeling you should get out of a USA Les Paul, but you don't. Not at all.

USA Les Pauls are the Tiger Games of guitar stores. They're everywhere, they're too common, there's nothing special about them and they just suck. And the fact they're almost always dusty and got a 30% whack in price proves nobody cares about those overpriced turds anymore.

Buy yourself a Heritage H150 (or if you're daring, a Godin Icon Type 2 Convertible) or an Epiphone Prophecy EX instead. You'll be much happier with either, believe me.