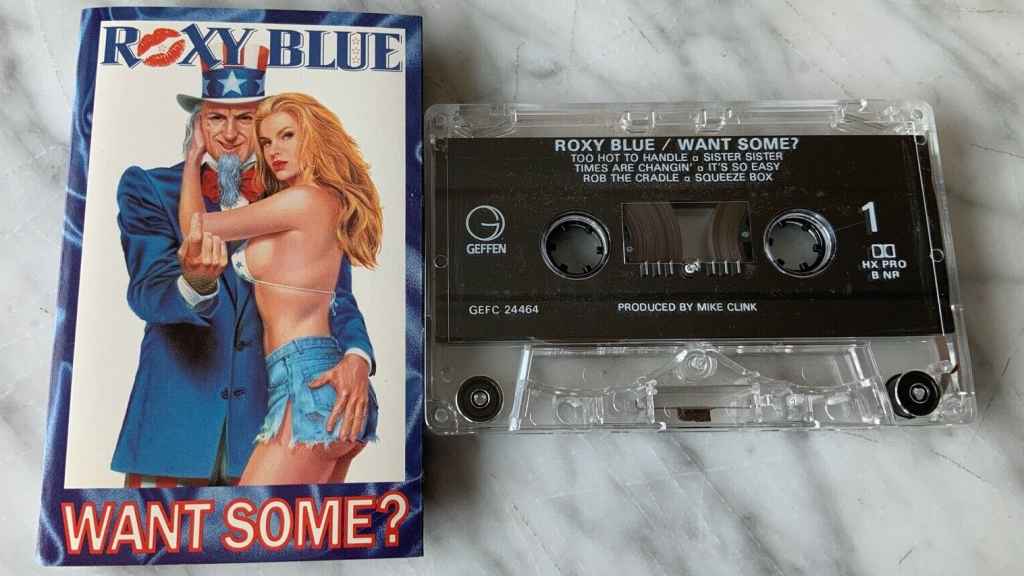 Back in my late teens one late night in 1992, I was watching MTV (Music Television). The show that was on was either Headbangers Ball or 120 Minutes. I don't remember which show it was.

Towards the very end of the show, on comes a video by Roxy Blue. The song was Rob The Cradle. My eyebrows raised, my eyes widened. I seriously couldn't believe I was seeing a glam rock band on MTV... in '92. Even though I was all by myself, to this day I can still remember feeling embarrassed actually watching that video. It was one of those, "Well, there goes 4 minutes of my life I'll never get back" moments.

Nevermind by Nirvana already happened the previous year in '91, and that was the very loud signal that glam rock was dead, dead, dead. Stick a fork in it, it's done. Buh-bye. See ya.

However, glam rock didn't die overnight. Nope. It took some time before it all went away. 1992 was the year where many, many bands lost their livelihoods because grunge destroyed it all.

Roxy Blue was the very last example I saw of The Glam Rock Machine. This machine started around 1984 and came to its very bitter end in 1992.

If you were in a rock band then during The Glam Machine era, it was mandatory that you had to have the "wild party boys" image. You had to have long hair, mouth gaping open every time the camera is on you as if to say, "Oh my God, what crazy thing will I do next?", dress in spandex on stage, wear a leather motorcycle jacket when not on stage (even though you don't ride a motorcycle), SMILE SMILE SMILE all the time, jump around like an idiot on stage with boundless energy, and so on.

Where the song material was concerned, there were only two types in the glam rock genre. The party song and the ballad. That's it. Party songs were about drinking, loose women and being a scofflaw for absolutely no reason at all. Ballads were written for women listeners to push more album sales.

Now of course, all of this was a totally dead market by '92. But The Glam Machine was a very established way of doing things in the rock music industry for almost ten years. As such, dismantling that machine wasn't just something where a switch was flipped to change it all to something else...

...which is why I saw that Roxy Blue video one late night in '92 on MTV. The Glam Machine was well on its way out, but MTV was most likely obligated to show that video due to record label agreements or something along those lines. It was a business decision to show that video. MTV, knowing that particular style of music was a dead duck but had to show it anyway, purposely placed it in a throwaway time slot just so they could say, "Yep, we played the video and the obligation has been met."

Just imagine for a moment seeing music videos of all the more somber, heavier music of the day, and then WHAMMO, a train wreck of glam long after its heyday had passed. Loose women, spandex, hairspray, annoying guitar solos, SMILE, jump-jump-jump around...

...which left me thinking, "What is THIS garbage?"

I think it's comical now that a search for Roxy Blue ends up showing you mostly women's underwear products.

The boys in Roxy Blue did what they thought was the standard to be a successful rock band, but the standard had changed, and by '93, they were done.

Does Roxy Blue still exist today? Yes, but with different band members. You can check out this podcast with Todd Poole talking all about what's going with the band if interested. The podcast is from back in May '22 (it's July '22 as I write this), so I don't know what's gone on with the group since that podcast, but I assume they're still kickin' it on stage - albeit older and wiser now.

Is the music Roxy Blue makes now better than what they made in the '90s? Oh, yes. Their music now is much, much better compared to the '92 album.