Above is a little cheap keyboard I bought that will arrive in about a week, the Casio SA-46. And if you're thinking of buying one after reading what I write about it here, it's absolutely required you also buy the proper AC adapter for it as it does not come with one (but it can run off batteries).

Why this particular little synth?

It's one of the very few priced well south of $100 that actually sounds good, is built right and is polyphonic (multiple notes can be played at the same time) instead of monophonic (only one note at a time).

Polyphony is only 8-note, and that's good enough for something this size.

The other thing that makes the SA-46 great is something that's very easy to miss: 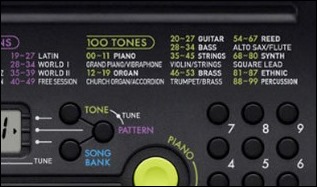 At top right you'll see it says "68-80 SYNTH SQUARE LEAD". What this means is that the SA-46 does in fact have old-style synth sounds in it, which most would characterize as "8-bit sound". It's not 8-bit (probably 16-bit or maybe even 32), but that's what people would describe it as because it's just a set of plain, honest-to-goodness square wave sounds.

In other words, the SA-46 has 12 old-style synth lead sounds. Really basic, no question, but that is exactly what a lot of synth players look for, myself included. These lead sounds can be made to sound huge very easily just by adding in an external reverb effect and maybe chorus to fatten it up slightly. No circuit bending required for this one because it is good enough out-of-the-box.

The other sound I bought it for is the strings, which again has that old-school flavor to it. I mean, what can I say, the SA-46 really has it where it counts and is truly a gem as far as a cheap synth goes.

The SA-46 obviously does not have full-size keys, but rather little miniature keys made for kid-sized hands, as the unit is made for young players.

There is a bigger version of the SA-46, the SA-76 (easily spotted by the fact the bottom is orange instead of green); it's a larger synth that has what appear to be slightly larger keys, and a few more features. It's also the same price as the SA-46...

...and that's the part you may be confused by. Why would I purposely buy a synth with less keys and less features when I could get something bigger with more features in it for the same price?

Answer: Small form factor. I seriously like the SA-46's smaller size. In fact, you could call its size "just right" because while small, it's not too small. It's a piece of hardware that can easily be picked up with one hand (and even has a grip indentation in the back), yet still played easily when set down, and can be put away easily as well. Very convenient.

It is a "real synth", even if a very basic one

While true there's no MIDI and only a single headphone output jack, the SA-46 is perfect for home studio use because it's got those old-style synth sounds in it. And heck, you could even use it for bass parts too.

I listed to a few sound samples online of the SA-46 and yep, I was sold. Great little synth for backing tracks with proper old-style square waves and strings.

And like I said above, to find anything with an under-$100 price tag in a small form factor that's done right is difficult - except for the SA-46 which totally nails it.

If you're thinking, "Oh, come on... Yamaha must make something small that's comparable." Nope. There are no cheap new Yamaha keyboards that are small at the moment. The cheapest Yamaha synth right now is the YPT series, and the starting physical size is 61 full-size keys and no smaller.

I do wish Yamaha would start making small inexpensive synths again, because they really did make some great stuff back in the day. Alas, they do not.

You can find the SA-76 easily in stores, but surprisingly you will not find the SA-46 anywhere as it seems to be an online-only thing.

I'll be happy to get mine, because I haven't touched the keys in a while and I've been really wanting to add some synth into some new stuff I'm writing.