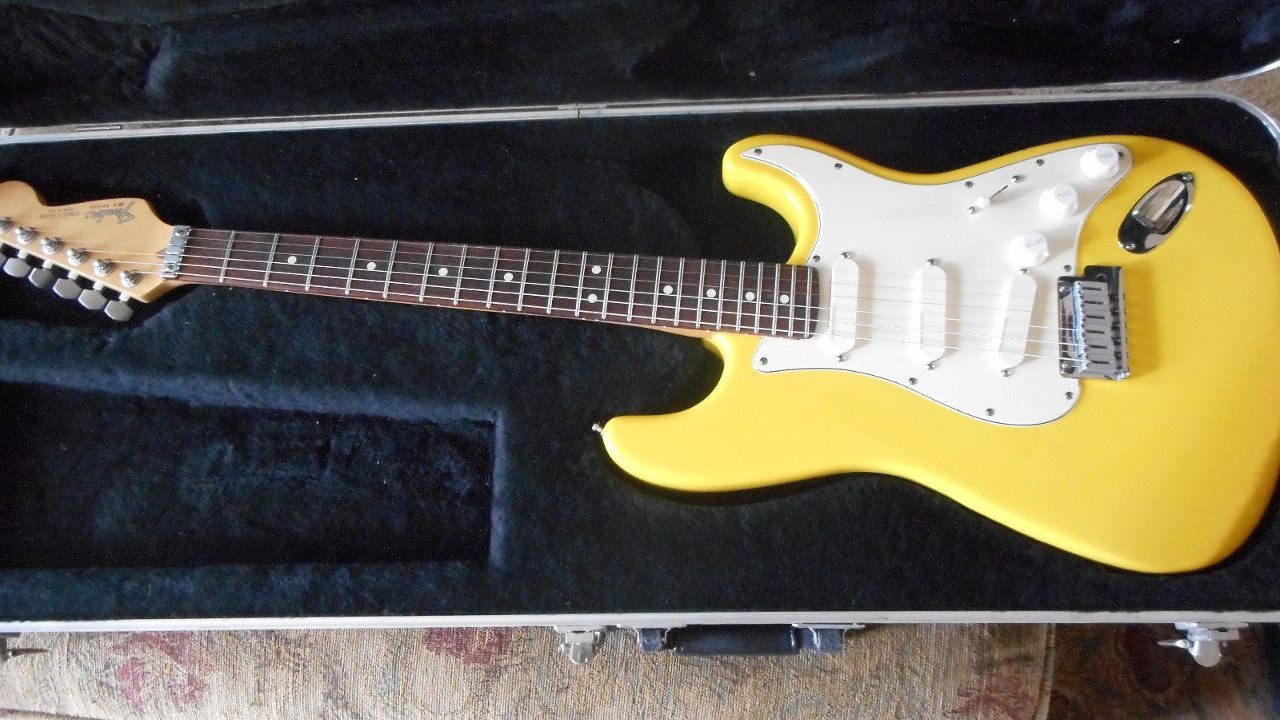 This is a cool color from Fender for those who want something different.

I'm writing this due to an email I received from someone who was thinking about buying a Fender ST62 Japan Stratocaster in this color and wanted to know some information about it. From our conversation I figured I might as well write something up on it here just in case anyone has interest in this particular color for the Strat.

The first time I saw Graffiti Yellow was on either a late 1980s or early 1990s Fender Stratocaster Plus model. It's one of those colors that's bright and bold, but not "neon" color as some people think it is. The GY color is ever-so slightly muted so it suits the guitar better.

The GY Strat pictured above is a 1989 model, and the oldest example I've seen only in pictures is from 1987. As for whether 1987 is the actual year GY was first offered, that I don't know.

GY at the time I write this is only available new on Fender Custom Shop models. Prior to that it was available on Fender Japan ST62 and the aforementioned Fender USA Stratocaster Plus model. The USA versions have a roller nut, Lace Sensor pickups and two-point bridge with offset block saddles. The Japan versions have the regular 6-screw bridge, traditional pickups and a traditional nut.

As for which one I personally like better, I'd take the Japan version because I prefer more traditional Strat builds.

You can find GY Strats from the late '80s all the way into the mid-2000s. As far as I know, GY was never a regular run production color. GY was always a limited run finish.

Was there ever a Squier in GY? I've never seen one. The closest Squier ever got to that color was Arctic White, but that's definitely not GY as it's several shades lighter.

No. I actually enjoy the fact GY isn't a regular color option. It's a special thing to see a GY Strat because they don't appear that often.

However, it would be nice to see an FSR (Fender Special Run) Strat and/or Tele, preferably as one of the more affordable models. Fender Mexico could easily make a limited run of GY Standard Series guitars.

If not Fender, seeing a Squier FSR of GY guitars would be cool too. As said above, I've never seen one, and I believe if Squier did do GY as a limited run, it would be the first time it ever happened.