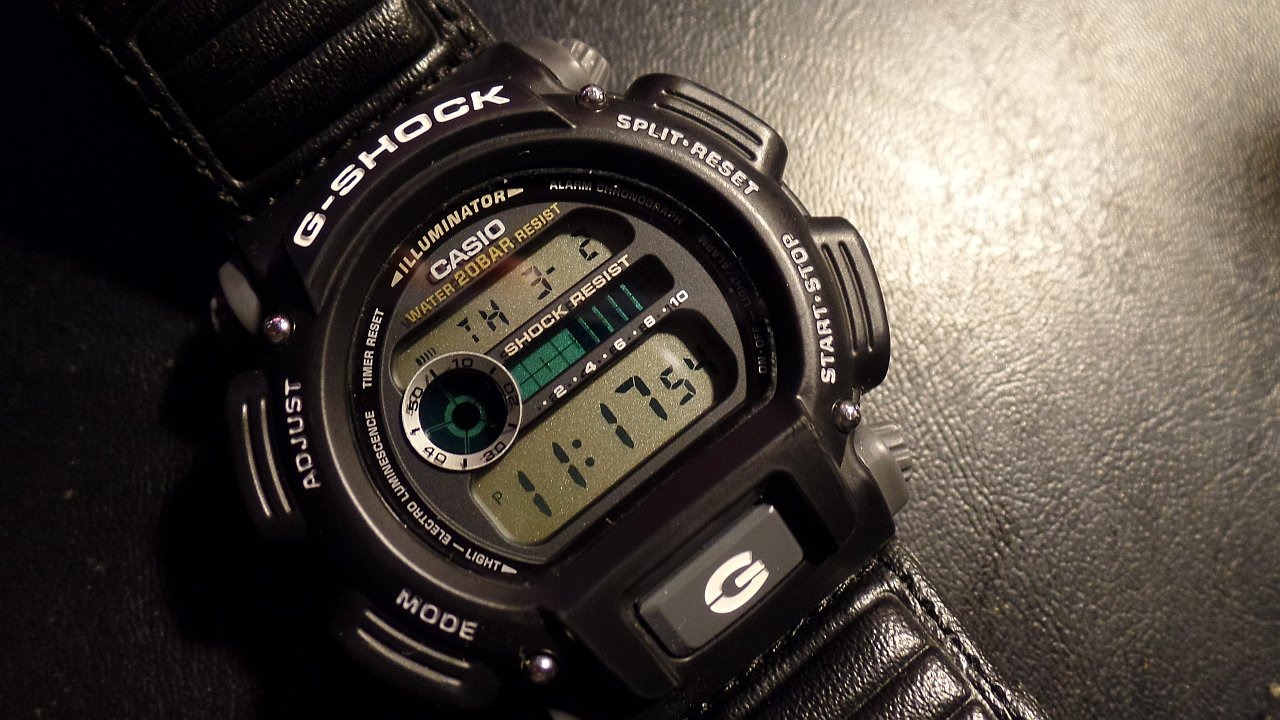 It took me a long time to figure something out...

...and that something is that I've been a G-SHOCK guy all along and didn't know it.

With guitars, I found out that my true calling was Fender and Squier offset models. The Jazzmaster, specifically. If someone had told me back in my teens that one day I would simply stop playing Strats completely and switch over to this weird-ass shaped, buzzy, trebly-extreme guitar with a gaggle of controls, I would have called you insane. But that's exactly what happened. And I wouldn't have it any other way.

Similarly, if someone had told me that the perfect wristwatch for me is a Casio G-SHOCK, I would have called you insane on that one too. But now I own a G-SHOCK. Just as the Jazzmaster is the guitar that totally says "me", a G-SHOCK says the same and that's what I wear on my wrist daily. But it took me a few years to realize this.

If you go back through my older posts here, there are more than a few things I've written about Casio watches as well as other brands. It started in 2011, and it wasn't until January 2017 that I finally bought a a used Casio G-SHOCK DW-9052. I wasn't even planning on buying one, but I was scanning around eBay, found one in great shape, placed 1 bid on it not thinking I'd actually win, and won it for just 29 bucks.

In the short time I've owned a G-SHOCK, I now understand why these things are so great. It has been said in YouTube videos, forums and other places that "those who know get a G-SHOCK". They just handle life better than any other watch you could get.

An example of "handling life"

Recently I had to drag a lawnmower out of the shed and get the thing running to do some mowing with it (yes, Floridians do start mowing in late February and early March). I got it running and mowed the grass. While doing that I glanced at my watch a few times because there were some errands I needed to run later that day at a certain time.

Not once did I worry about whether the watch could handle grass and dirt thrown at it. And oh yeah, it got dirty. But it was nothing to worry about. After I was done mowing, I went inside and just washed it off in the kitchen sink.

Had this been a smartphone, the dirt thrown around would have scratched up the screen like crazy, and you don't exactly hold a phone under running water to clean it. Even if I kept the phone in the pocket, I wouldn't have been able to pull it out anyway because I was wearing work gloves. But let's say I could have magically pulled the phone out. My work gloves would have scratched up the screen along with the dirt flying around.

It is the tough-built nature of the G-SHOCK that makes it worth owning. Knock it around, get it dirty, get it wet, whatever... it can handle just about anything.

On my wish list is the second G-SHOCK I want to get, the G9100 Gulfman. And I have a very specific reason for wanting it.

I love the DW-9052, but there is only one thing it doesn't have that I wish it did. Multiple alarms. I do use those almost every day. Right now I use two watches to get that task done. I wear the DW-9052 and keep a cheap AE1200 at my desk for a second alarm.

Aside from the DW-9052, there are only two G-SHOCK models with multiple alarms and a countdown timer with auto-repeat (which I also require) that fit my wrist. The G9000 Mudman and the G9100.

What keeps me from getting a G9000 Mudman is the fact the buttons on that model require a very firm press to work. This is by design. The reason it's called a Mudman is because it has extra protection over all the buttons to keep mud and dirt out of the case.

The G9100 Gulfman's buttons can be pressed much more easily. Function-wise it's much different than the Mudman as it has things like moon phase and tide prediction. It also has a titanium case back, hence the reason it says "RUST RESIST" right on the strap, as the titanium resists rust and corrosion better than a stainless steel case back would.

I don't necessarily need the moon phase and tide prediction, but I do need G-SHOCK toughness in a watch that has multiple alarms and timer with auto-repeat.

When I do get that G9100 in one way or another, if it fits right (and I think it will), I believe it will pretty much the best watch I could possibly own. There is nothing better out there for what I need a wristwatch for. And believe me, I've looked. The G9100 ticks all the right boxes, so hopefully I will be getting one at some point.