How did I learn to play Paranoid the right way? From a magazine 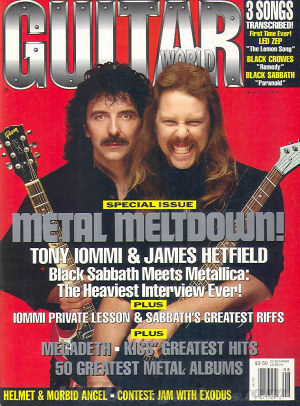 At right is the cover of the August 1992 issue of Guitar World. I was 17 at the time, and I bought the mag for one reason and one reason only - Tony Iommi was on the cover.

I never actually subscribed to any guitar magazines but rather picked up one whenever I was in a guitar store (as they were the only places that carried them). Because I bought it right off the stand, I always paid more for it compared to a subscription. Something like 3 or 4 dollars. Maybe a little less.

The better part however was that in this mag Iommi actually describes how to play Paranoid the right way. Remember, this is 1992 we're talking about here, meaning no internet. It was in that magazine that I read for the first time that the main riff is supposed to be played on the 12th fret and not the 7th like I had been doing. To me this was like finding the keys that unlocked that "secret Iommi tone" I was looking for. If I recall correctly, he also explained other things, such as the fact uses super-light strings, how he really doesn't pick that hard at all, some explanation on the "thimbles" he uses on his severed fingers and so on. It's all great info.

My point in mentioning all this is that it really takes information - written information mind you - to sometimes get a sound right.

Internet video is great and all that, but there are times you have to actually read things to learn how to play better. I'm not talking about just tabs and things like that but rather interviews, write-ups and things of that sort. Old guitar magazines contain a treasure trove of this information, much of which you'll never learn just by watching videos.

If you know of anyone that has old guitar magazines, read them - especially the interviews explaining how songs are done and where the inspiration for them came from. You'll learn a lot.