How to deal with YouTube as a guitar player

YouTube has, without question, the absolute worst community on the internet. However YouTube is the #1 video sharing web site there is, so you're pretty much forced to use it if you want to get any attention as a guitar player.

There are many players who purposely don't post videos to YouTube for the simple reason the audience there is so unbelievably hateful. I've been on YouTube since 2006 and have pretty much received every type of nasty comment you can possibly imagine. And yes, there were several times I wanted to say "SCREW THIS", close my YouTube account and never bother posting videos on that site again. I stayed with the site because I learned how to deal with the crowd over there.

These are my tips on how to deal with YouTube as a guitar player. 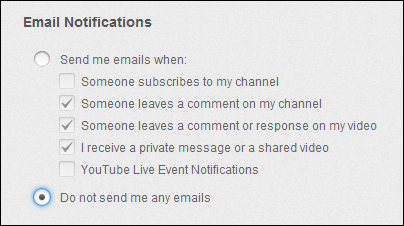 I receive no email from YouTube whatsoever because I don't need my email inbox flooded with hateful stupid comments every day.

When logged into YouTube, go to the account notifications area, and that's where can turn off all the emails. Believe me when I say that doing this is a huge relief, because otherwise your inbox will be flooded with hate every day, depending on the traffic your videos get (and mine get quite a bit of traffic).

Hate comments are going to happen on YouTube and that's just the way it is. You have four ways of dealing with this.

The proper choice is D. Allow everything. All of it. There's an old saying that there's no such thing as bad publicity, and this is a true statement. Leave all comments enabled, leave all ratings enabled and don't block anybody.

Fun fact: People who make it a point to post hate comments everywhere on YouTube will eventually get kicked off the system by other users, so you don't even have to do anything to get them booted from the system. When a specific user gets their comments flagged enough times, their account gets disabled. Happens all the time.

3. Be very selective about how you reply to comments

If however you want to participate in commentary, just be very selective about it.

What I used to do on YouTube was blast back at anyone who posted a hate comment in my direction, then block them. I don't do that anymore because that's a complete waste of my time. Instead, I employ the "treat a YouTube commenter as a customer" approach.

4. Remember that ratings mean absolutely nothing

Originally, YouTube videos had a 5-star rating system, then later changed this to just "like" or "dislike" because most of the time people would only rate a video a 1-star (worst) or a 5-star (best) anyway.

At right are the ratings for one of my videos. Out of 624 ratings, about 33% of them are "dislikes". Do I care? Nope. And neither should you for your own videos.

There are some people who take dislikes very seriously. They see that red line (soon to be replaced with a lighter-gray line) and just freak out about it. As for why they do, it's a psychological reason. People don't want to be hated, and when they see dislike ratings, that makes them feel bad.

Also, any video creator who complains about dislike ratings in the form of a comment or video is a complete idiot, because he or she should be happy people even bother to rate their videos in the first place.

If you're a company trying to make a good image and purposely disable video ratings, that I can understand. But for guitar players, it's like I said above, just let the hate flow.

5. Understand that hate happens on YouTube just for the sake of being hateful and nothing else

It doesn't matter how many positive videos you post or how much you try to be a good person online, because someone is going to hate your guts. And they'll hate you for the dumbest reasons.

In the way human nature works, it is always easier to complain rather than compliment. Everyone has something to complain about, and complaining is easy. Complimenting on the other hand takes actual effort.

A common complaint is that there are no more nice people in the world. Not true. There are plenty of nice people out there, but most of them aren't on YouTube, so all you see there for the most part is massive amounts of hate spread through the site like some incurable disease.

This is incidentally why I think it was a genius idea for Facebook to not have any ability to "dislike" anything, because if they did, everything would be "disliked" and nobody would use the system.

YouTube should have the option on every video uploaded to "Allow dislikes in ratings?" so the video uploader has the choice of what type of ratings are allowed. Will that ever happen? Doubtful, but one can hope.

If as a guitar player you dare to post videos on YouTube, you're going to have to deal with the ever-present waves of negativity on that site. This does require courage and a high level of tolerance on your part. You can make the site work for you and get known as a guitar player through your videos as long as you don't let the hate get you down.