How to get a "dreamy" guitar delay effect 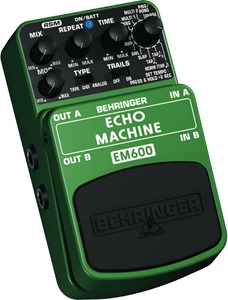 The "dreamy" delay effect is possible to get in one of two ways.

What I mean by a dreamy delay effect is best shown with a demo. Here's one of the pedal above, the Behringer Echo Machine EM600:

You get a whole lot of cool delay effects with the EM600. While not as fancy or well-built as the BOSS Tera Echo, you really can't beat the EM600's price for what it's capable of...

...unless you're the kind of player who would rather have a more simple solution to getting that dreamy delay effect, as the EM600 is a bit complicated.

The key to getting that dreamy delay sound is through "trails." There are pedals such as the EM600 and Tera Echo that can do that all in one pedal. But there's also another way.

Now in all honesty, I honestly think the double-pedal method is better for the simple reason you can mix and match analog and digital real easy. I'll talk more about that in a moment.

Of the two delay pedals you chain together, one of them has to have the ability to produce long delays of at least 500ms (half-a-second.) The other can can be short-delay-only with a 300ms maximum delay and that's fine, but one has to have the long-style repeats.

To get that dreamy sound with two delay pedals, the process is simple. One pedal has a long delay, the other a short delay. The first pedal in the chain gets the short delay, and the second gets the long delay. Or you can do it the other way around. Use whatever you think sounds better.

What happens is a "stuttering" effect, and when you play soft chords and/or long notes, the dreamy delay sound happens.

Now as far as what type of delay pedals work best for this, I personally think the short-delay pedal is best as an analog and the long delay is best as a digital. The first analog delay has that not-a-perfect-copy type of repeat, while the second digital delay does have the perfect-copy repeat type.

Some players really like the sound of very specific delay pedals, usually of an analog type. That's fine, but chaining two analog delays together can create unwanted line noise. Having the second pedal as a digital keeps the signal clean and acts as the "dream maker" of sorts for the dreamy sound.

Yes, it is possible to do this with two digital delay pedals if that's what you're comfortable using.

A generic way to try out double-pedal delay is to have the first pedal as 300ms and the second pedal is 500ms or 700ms. You don't want an exact doubling of the first pedal because that defeats the whole point of doing this. You purposely want each pedal "out of time" with each other. Don't even worry about synchronization of the repeats here. What you're going for is that dreamy/atmospheric sound.

As far as how loud each pedal should be, generally you want the first pedal effect louder than the second one. You'll have to experiment to see what works best for you.

Another example using a single pedal setup is the VOX Double Deca.

The Double Deca isn't cheap, but it does have the ability to combine both the long and short delays at the same time in the same pedal:

But as you can hear, the separation of the short and long delays when both are active isn't exactly that good.

Make no mistake, the Double Deca is a fantastic pedal, but for the real-deal dreamy effect, having two delay pedals is sometimes the only way to go.

If you already have a delay pedal now, get a cheap Behringer DD400 (a digital pedal) as your second delay, or buy a pair of them to get that cool dreamy delay effect happening. Or you can visit your local guitar store, see what they have for used delay pedals and just pick up the cheapest they have available. Or you can try the single pedal EM600 and see how that works out. Just bear in mind the EM600 has a lot going on with it and is complicated. It's nothing you can't learn, but it takes a little while to fully take in everything that pedal can do.