How to record multitrack audio without a computer

The first question on your mind when it comes to recording with no computer is, "Why?"

There are many answers to this question, however the most common answer is, "Because the computer ticks me off and I don't want to record with that stupid thing."

Now before continuing, when you dive into the world of no-computer analog recording, there are a few things you have to know right up front.

White noise is a hissing sound. When you record to tape, the hissing will happen. Always. But don't let it get you down because you can take care of it on the digital side later with some noise filters using the free Audacity software.

2. Digital at some point is always involved later in the process

The easiest way to share out your music is via the internet, and for that to happen, a digital copy of your music must be made.

Trivia: Megadeth was one of the first big metal acts to record DDD in the 1990s. A ton of money went into their studio recording processes back in the day.

The one you'll be doing here in the method I'll show below is AAD. You will first record with analog, mix down with analog, and then after sending the audio to the computer you'll do basic digital mastering (sounds complicated but it's not) so you can share out your music on the internet.

The cost involved is the recording unit itself, and the tapes. When you run out of tapes, your only option is to record over what you recorded before, or buy new tapes. And the tapes you use must be high-quality or your recordings will be awful.

The cheapest way to record with analog is with multitrack audiocassette machines from the 1990s. The machines are cheap (somewhat) as are the tapes for them.

For the example machine, I'll be talking about the Tascam PortaStudio 424. Specifically, the first-generation model which was a light gray color and looks like this: 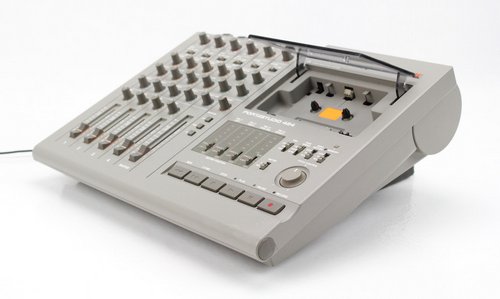 There are several generations of the 424. Later models (like the MKII and MKIII) had XLR inputs for microphones. The first-gen model has no XLR and only 1/4-inch inputs. I personally prefer the first-gen 424 because it's compact and doesn't have problems like the later models had.

The 424 is a 4-track recorder with six 1/4-inch inputs. Four of those inputs are mono and two are stereo. The output is RCA jacks only (the black 1/4-inch seen is for "effects send" and does not serve to output audio anywhere). 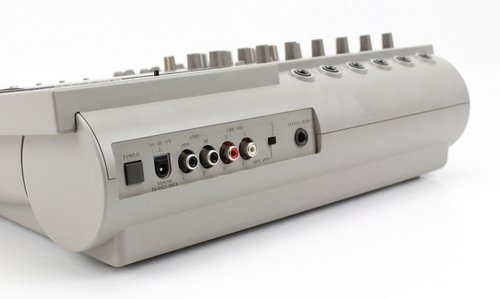 On the front panel you have four sliders for volume control, and a fifth slider for your master volume. To the right of that are your tape controls and a simple LED panel with colored lights showing the input level of each input whenever sound is coming through it.

The best tapes to use in the 424 are 60-minute hi-bias "Type II" cassettes, which you can still buy new. These have thicker slack that makes for better editing and recorded sound. You will most likely find 90-minute versions of these, but the best to use are 60-minute because the tape slack is thicker.

How does this thing squeeze four tracks of audio on tape?

By using both sides of the tape at once.

On the 424, when you're finished using one side of the tape, you can't just flip it over and start using the other side because it has already been used. The 424 uses almost the entire width of the slack to do what it does.

Do you get a full 60 minutes of recording out of a 60-minute tape?

You can if you wish. The 424 can record at "SLOW", "NORM" or "HIGH". Slow is roughly half-speed. Norm is normal speed, and high is roughly double-speed. High is the best because the more slack used, the better the recording.

Known problems when recording this way

The first-gen 424 has no real-time counter, as in one that counts in literal seconds or minutes. Instead you have a mechanical counter that's 000 through 999, and it's right above the tape door:

The stalk is a reset button when you want to reset the counter. Remember, NOTHING about the 424 is digital. This is all mechanical and analog.

Very difficult to splice in edits

There's no cut/paste or "jump" cutting on the 424. When you try to splice in an edit, there's a noticable momentary "blank" in the audio. What this basically means is that if you don't get your recorded audio right on the first take, you'll have to do that take over again until you do.

When you finish a recording and get your levels (both for volume and panning) just right, you have to write those down so you don't forget them, because when you go to the next tape and start recording on that, you have to reset your slider levels and pans.

It is very easy to record over stuff accidentally

The 424 does have "safe" switch settings for each track. However, you have to remember to set those to prevent accidental track record-over. If you don't, you will record over a track accidentally, and when that happens, there's no "undo".

Everything is explained in the manual, but it's not easy to use

Fortunately, the entire manual for the 424 is online, but said honestly, if you buy one, get the printed manual because it's just convenient to have.

You will have to read through the whole thing and it will take you a while before you learn how to do things "the 424 way". Tascam did their best to make the 424 as easy as possible to use, but the fact is that there really is no way to make analog multitracking easy as it's just difficult to master by nature.

Once you get to know the 424, it's fairly easy to get along with. But it will take time to learn it, and you will mess up some recordings in the process. It will happen. Expect it.

Cool things you can do with the 424

This is one of the best features of the 424. Let's say you have two guitars. One is tuned to standard tuning, and the other tuned to D#. You can record to track 1 with your first guitar, finish, unplug, plug in your second guitar, then just pitch the entire recording down a half-step with the pitch wheel, and record with your second guitar without having to retune it. When done, pitch up the 424 back to normal speed. It's a beautiful thing. To this day, digital recording has never been able to do this easily, but it's a breeze on the 424.

This is a very advanced technique with the 424, so don't try this until you become very familiar with the unit. When you read this you'll be confused and I can guarantee that. But if you ever get a 424, this will make complete sense to you.

Recording guitars and vocals backwards is just a cool thing, and the 424 makes this really easy to do. When you get to the point in the song you want to start recording backwards, you stop the tape and flip it over. Tracks 1 and 2 will now be 3 and 4, so you record to track 2 which will be 3 when you flip the tape back over after you're done.

It's pretty much mandataory that if you intend to record stuff backwards, the drums have to be laid down first so you have some idea of what you're listening to, because everything sounds weird in reverse.

"Ping pong" up to 7 tracks of audio

This is another advanced recording technique of the 424. And again, this will make no sense to you until you get a 424 for yourself.

You've got 4 tracks. That's it. When you fill up the first 3 for a song, you combine those three and then record them all at once to track 4. Now instead of 3 tracks used, you're only using 1. Then you record stuff to tracks 1 and 2, and then re-record those to track 3. Then you have 1 and 2 left to record with.

The only drawback to ping-ponging tracks is that they all have to be mono. No stereo.

Of course it is. Recording with no computer may be a bit of the pain in the ass at first, but once you get used to it, it's pretty cool.

The only thing you really have to worry about with the 424 is the tape drive mechanism, as that is always the first thing to break on these things.

I strongly suggest that if you're thinking about getting one, make sure you know someone local to you that knows how to repair cassette decks. Even if the 424 you get is in pristine mint condition, the belts are probably dried out and the drive motor a bit "wobbly" in operation. If you have a guy take apart the 424 and recondition the unit before using it yourself, you will get years or recording enjoyment out of one.

As for the tapes you buy, all you have to do is make certain that any you buy are sealed and never-opened. These are easy to find on eBay. And don't worry, hi-bias tapes are going to be around for at least another decade before the start to become hard to find. Tapes may not be in wide production anymore, but there are literally tens of thousands of them out there that are still sealed, unused and ready-to-record with.

How do you send audio to the PC for digital mastering?

With an RCA-male to stereo 1/8th-inch male cord. On the RCA are a red and white to go into the Tascam 424, and the other side is a male stereo connector to go into your PC's "LINE IN" port on your sound card. From there you play back your audio from the 424 and record to the PC using your audio software of choice like Audacity, mentioned above. Once the audio is fed in, you can digitally master it with some noise filters to take out the white noise.