How to stop hoarding guitars and guitar gear 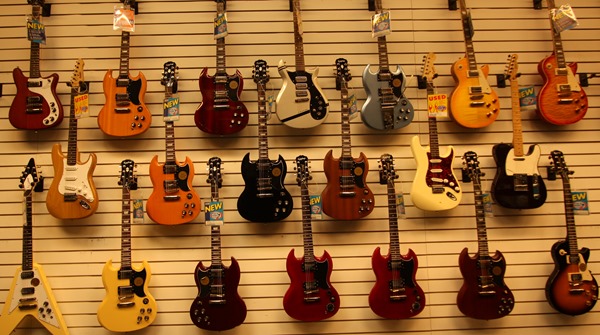 I said in a recent post that I was going to write more about this, so here it is.

Compulsive hoarding as of the release of the DSM-5 in 2013 is a defined mental disorder. Humans have gotten to the point where the acquisition of stuff has become so bad and so destructive that we had to qualify it as a mental illness to try and figure out a way to stop it.

Since there is no magic pill to take to stop compulsive hoarding, the only way to tackle the problem is with good ol' willpower. That, and telling guitar hoarders in very blunt fashion that they are hoarding and need to stop it.

A common guitar hoarder thing is one who has a lot of guitars either in pieces or that are outright broken. He will label these guitars as "projects" to be completed later. But they never get completed.

Mr. Guitar Hoarder will spot some guitar on Craigslist or at a flea market, his eyes will light up and he'll say to himself, "I can fix that!" That's the moment of satisfaction that he craves, so he will flash cash and buy the thing. Of course, the guitar will never get fixed. It'll just go in the "work area", tossed in a corner and promptly forgotten.

Boxes and boxes of electronics junk

The guitar hoarder has several boxes of electronics junk, and in true hoarder style, truly does not know what's in each box. And if you ask him what's in the box, he will get VERY ANGRY at you for daring to ask, and blurt back "I KNOW WHAT'S IN THERE." No, I don't think so, pal. You haven't a clue what's in there.

When the guitars and electronics junk starts piling up enough, they get layered with dust, and after a while, bugs will nest inside those "project" guitars and/or their guitar cases, should they have them.

If you just said to yourself, "Eww! GROSS!", you're right, it is. And it does happen. Hoarders don't care about the guitars. All they care about is the acquisition of stuff.

In really bad scenarios, even the tools start getting layers of dust on them, because they're never used.

Sound familiar? If you know a guitar hoarder, it probably does.

How to clear the hoard

This is basically a 5-step process.

Step 1. Dump the electronics junk and the junk parts.

Any electronic you have that is broken or non-functional gets tossed. ALL of it. All the busted-up wires, cables, pickups, pots, tuners, etc. It all goes.

When doing this, DO NOT stop to check every little frickin' thing. That's a hoarder tactic to slow the process down so nothing ever gets thrown out. Just empty those stupid boxes of those stupid broken parts and THROW. THEM. OUT. They are not worth anything to anyone and do nothing but take up space. Get rid of all of it.

Step 2. Put all your junk guitar woods together and sell as a pile.

It's probably true all your bodies and necks are from no-name crap brands. Put all that together and sell your hoard to another hoarder. I'm not kidding. Yes, I am saying to capitalize on someone else's hoarding disorder.

DO NOT overprice the pile. Price it real cheap, post to Craigslist and say first come, first serve. Some idiot will buy it. Sell it all, and enjoy the cash - but don't spend it on more guitar crap.

Step 3. Sell all functional guitars you don't use.

If you have 10 guitars and they all work, sell every single one you don't use. And yeah, that may mean you end up with nothing but 1 guitar left. Do it.

Step 4. Sell all broken amplifiers and cabinets for parts, and sell cheap.

Craigslist again here. Rip out all the amps and sell as electronics parts. Both guitar guys and maybe even some ham radio guys would be interested in this. Don't even bother cleaning it up. Just put them all in a pile and sell. Sell cheap and get rid of them.

Craigslist once again here. Amps and cabinets are a pain to ship, so don't bother with that. Just sell local and sell cheap.

Got friends to help? Let them sell off the hoard for you.

It may be too emotionally distressing to sell all this stuff yourself. If that's the case and you've got friends to help, this is the process:

On step 4 in particular, don't be there. If your friends are trustworthy (and they should be if they're people you call friends), just let them clear out the whole thing and don't even worry about the money made from it. If you make even so much as 50 bucks, consider yourself lucky because up until this point you've been spending money and going in a negative fiscal direction.

When I say "don't be there", I literally mean don't be there. Don't even be at the house. Find somewhere to go for the afternoon that's not there.

I guarantee you will feel a tremendous sense of relief when you see that emptied room after you come back.

You totally want to put yourself in that danger zone where you know the stuff is going to be cleared and there's not a damned thing you can do about it. Otherwise, that pile of crap will never get out of your house.

The next step: Start thinking smaller with your guitars and guitar gear

Right, so the hoard is now gone. Good for you. Now it's time to rethink how you do guitars and guitar gear.

With guitars, thinking smaller is easy. Just find a guitar you like, stick with it and don't buy more.

With effects, going smaller means using multi-effects units. Instead of having a bulky collection of pedals, use in-amp effects or a single external multi-effect unit like the Korg Pandora Stomp, DigiTech RP255 or like unit. And yes, I know, multi-effect units don't look "cool". Who cares? The point is to get something that has as many effects in it as possible so you don't have to spread that out into a bunch of noisy separate pedals.

With amps, there is a lot of joy to be had in smaller units. Have you see the Bugera BC15? I don't like tubes, but that one is small, tidy and looks great. And cheap! Or for something small that packs punch and has effects built-in, it's really tough to beat the Fender Mustang I. If on the other hand you need something with some real balls to it that can belt out some loudness, Fender Mustang III.

Yes, it is OK to have a practice amp and a gigging amp, obviously. But don't go beyond that or you'll end up with a hoard again.

Basically, the point I'm making here is to get the most for your money, instead of just constantly hoarding more and more guitars and gear.

Remember, a hoard ultimately wastes money just by existing. You wasted money on buying all that crap, and it's whacking you again by taking up space and might even be causing a safety hazard in your own home.

Clear out the hoard first, go small, and try to buy stuff that you can really, you know, use.

Consider switching your hoard out for a properly-made studio

This is the last bit of advice I'll give to end this one.

If you've got a room full of guitar crap, and that room is large enough to where you could get some recording gear in there, converting that to a usable studio is actually not a bad idea.

I personally think building a recording studio in a house is a waste of time. However, given the choice between a guitar hoard and a studio, the studio is obviously the better choice because it's actually usable. With the space gained from removing the hoard, it's probably true a whole band could fit in there even with the recording equipment present.

Even if it's just you and your friends doing for-fun recordings, that's still a whole lot better than a dirty, useless guitar gear hoard.