The Roadcore Series from Ibanez is a back-to-basics guitar that, amazingly, doesn't look like anything else out there right now. And that's not an easy thing to do, especially when it comes to mass-produced electric guitars.

Generally speaking, most electric guitars either look like Strats, Les Pauls, Explorers or Flying Vs. Any electric guitar that goes outside of those standard shapes is usually something really wacky and ugly. An example of wacky/ugly is any Schecter Synyster Gates model. Those are some seriously stupid guitars. Dopey shape, dopey fret inlays with skulls and batwings (yes, really), a headstock shape that doesn't match the body shape at all... it's just stupid. Those kind of guitars are made for kids and gamers that don't know any better.

This is not to say Ibanez doesn't have stupid guitars of their own. The JEM with that ridiculous monkey grip hole in the body... it just begs the question, "What were they thinking with that?"

However, sometimes something comes along that's really good where it's new, but not wacky nor stupid. Ibanez Roadcore is it.

The model above is the Ibanez RC365H in Light Violin Sunburst. Yes, it is a semi-hollow body as the f-hole suggests. It's a true hardtail with no vibrato and borrows from Fender designs, but not so much that you'd mistake this for a Fender.

I can only see two things with this design that some players may not like. One is a potential design flaw and the other a visual thing.

First is the position of the pickup selector switch. While the volume knob position is perfect as it's nowhere near the rear pickup (a common complaint of Strat owners), the pickup selector is in a spot where someone who picks with long strokes may hit that switch accidentally.

Second, and this is a nitpick but I noticed it, the truss rod hole isn't colored black, and that looks cheap. On sub-$400 guitars I expect this as a cost-cutter maneuver, but not on something like the Roadcore.

The scale of the neck is 25.5-inch, which is Fender standard. However, the mild offset shape of the body means the higher frets are within easier access for most players; it should be an excellent guitar for playing sitting or standing.

The radius is, interestingly, slightly rounder than Fender modern spec at 9.45-inch (Fender modern is 9.5-inch).

According to Ibanez, the guitar is meant to "feel vintage" and most likely sound vintage. Frets are medium jumbo, both pickups have alnico magnets in them, the hardware is chrome, fretboard is traditional rosewood.

This Roadcore is not a "shredder" guitar. Not at all. That's a good thing, because any shredder guitar is junk.

This also means a Roadcore will last a really long time; it's a guitar that will break in nicely over time and not end up in the dumpster in less than 5 years (as most shredder guitars do).

The body is listed as a maple/mahogany combo. That probably means a mahogany body with a thin maple cap.

The neck, however, is definitely maple.

On the back of the guitar are a few nice surprises, and one weird thing. 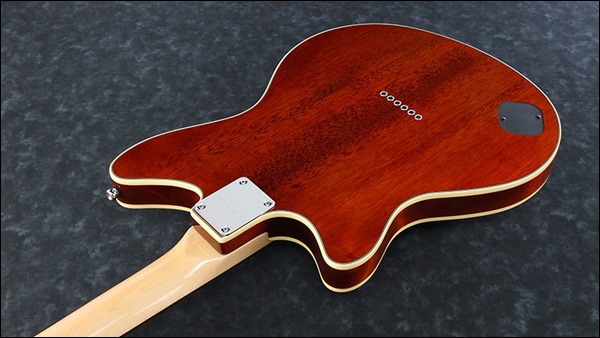 Yes, there is body binding, a bolt-on neck, string-through construction, and the oddball here is an accessible control cavity in the rear.

What's the rear control cavity for? I don't know. Ibanez lists the guitar as having passive pickups, meaning not active, meaning no 9-volt battery required.

I even went to the Ibanez web site and downloaded the manual; it didn't say what that cavity is for either.

So... I'm forced to guess. And my guess is that under that plate is easy-access wiring for the output jack, as it's set too far back to have anything to do with the control knobs. Bear in mind I am guessing, so I could be totally wrong.

Aside from that mystery cavity, the guitar is just plain cool. Not overstyled, not understyled, has a really nice combo of retro and modern, and its configuration makes it ridiculously easy to set up and play.

How do I know it sounds good? There are YouTube videos of other Roadcores being played, and yeah, the pickups are definitely voiced right. The only difference with this one is the Telecaster-style single-coil on the front position that adds in the "spank" this guitar so desperately needed. And now it has it.

Great guitar if you were looking for something different that captures a good vintage vibe while still staying modern.