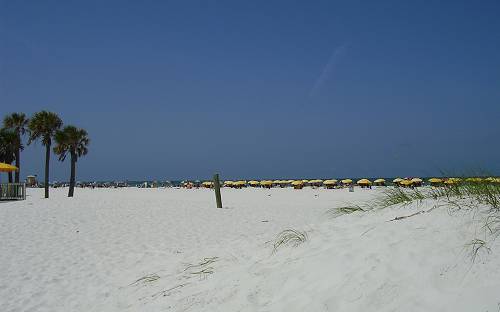 Above: Clearwater Beach, north side (I think) I'm also tagging this as a photos post since I put a photo in it. And yes, that's a real photo I took. Looks just like the postcards, doesn't it?

This post is going to have some random ramblings in it.

I'm sorta ticked off right now. I got my Alesis Fusion synth all set up with my new Sound Blaster ready to record some jams, and what did I forget to pack? A cord worth about five bucks. Yeah. Holy crap does that tick me off - and does so because I specifically made the mental note of okay, must pack this cord so I don't have to buy another one before I moved. And forgot it anyway. Dammit.

So... on the agenda for tomorrow - go to Radidididio Shack, buy a cord and a small adapter and waste ten bucks because after all, it's Radio Shack we're talking about where everything is double the price.

I know exactly what's going to happen later on. I'm going to buy the cable and adapter tomorrow and then some time in the future I will find the cord I packed, then involuntarily smack myself on the forehead afterwards.

At present I'm not working but that will change rather quickly. After all, Tampa boasts lots o' jobs. Tons. It's extremely unlikely I'd be unemployed for long. At present I'm waiting on callbacks for two jobs on Monday. Yeah. Already. And I haven't even been here a week yet. I'm crossing my fingers that good things will happen on Monday.

When I was out driving around earlier this evening I had the window rolled down because it was nice out (it's always nice out). While at a stop light I heard some kid say "Hey look! That guy has GPS navigati--" and then faded away as they drove off.

Watching tourists driving around Tampa is funny, particularly the moms in minivans pointing wildly in different directions from the driver's seat. You can't hear them (the windows are rolled up in the rented van with the A/C at full strength) but you can imagine the conversation going on inside there. Most likely it's a shouting match of some kind. SHOULD WE TURN HERE? THAT'S BUSCH AVE! NO, UH.. THERE'S FIVE FRICKIN' LANES AND I CAN'T GET TO THE LEFT! OH FOR CHRISTS' SAKE I DUNNO! DAMMIT THERE'S NOWHERE TO PARK!

By the way, the trick to driving in the Tampa tourist trap is actually very simple and I've figured it out already. Follow these steps:

1. There are several four lane and five lane 45mph roads. If you know you're going to turn left in a left-only lane three miles ahead, get to the left lane as soon as you can and stay there. Other people will pass you on the right - this is okay and they expect it.

2. It is common to wait at least two minutes at a stop light. No need to get upset. Just wait. Your turn (literally) will come.

3. Mind the crosswalks. People use them often. In New England it really doesn't matter. If there's a stop light with a crosswalk in front of it, drivers will stop on the crosswalk over the stop line. Do this in Tampa and people will yell at you - including other drivers.

4. If you suspect someone in the lane next to you will cut in front of you, they will, and it's usually a tourist that doesn't know where he's going. Stay back at least one car length so you're not in their blind spot, or speed up so they can see you on the side of them.

5. Whenever possible, only take major roads that have street lights. If you don't, you'll be sitting waiting to pull your car out into traffic for at least ten minutes - and that's no joke. It's happened to me twice already.

You also see tourists roll down the window and yap at other drivers while at a light desperately trying to find out where they're going. This hasn't happened to me yet and I hope it doesn't. If it does, I would purposely give them wrong directions. Yeah, just get on I-275 and go North and keep on goin' until you see the exit. Yep!

I will give credit to Tampa natives. Most of them are very, very patient people when behind the wheel.