If you don't take notes, you will forget everything 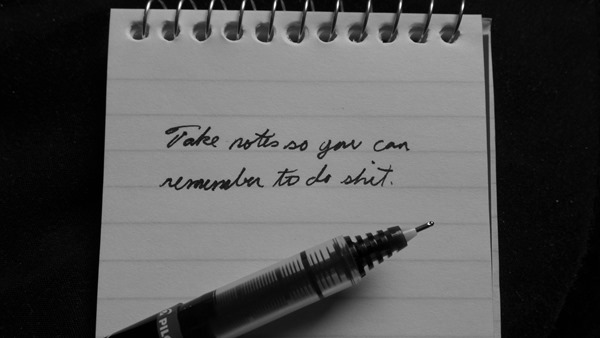 I do something that most people don't do. I take notes.

For just about any task I have to do, if I don't jot it down as a handwritten note, I will forget it. And yes, it has to be handwritten.

Over the years, I've tried almost every electronic means of note taking. The only one I've not used is voice memos because there's really no way to organize those, so if you have a bunch recorded, you have to go through them all to find the one you're looking for, just like voice mail. And I can't stand voice mail.

When it comes to reminders, electronic notes are good for that, but it has to be in email. For example, I have a recurrent email set up that reminds me to take out the trash the day before trash day. If I didn't get that weekly email, I would forget to do it. When I get the email, I take out the trash, then delete the email out of my inbox. It works. And for those of you out there that think that's a good idea, Yahoo! Mail, AOL Mail, Hotmail and Gmail all have calendar functions where you can set up recurrent reminders like that. Email is the best to use because you'll get the reminder anywhere you access your account, be it desktop PC, laptop, phone or tablet.

But when it comes to traditional note taking, doing it electronically just doesn't work, and there are four reasons why.

I read tons of internet articles, see tons of internet video, go through a ton of emails, see/read/view a ton of social media, and all that turns into a big mush. I interpret that mush as noise, and naturally, my brain will filter that noise right out. It's an automatic thing my brain does, and as such, using electronic means of note taking is worthless because I will totally forget any to-do list I create on the computer.

Reason 2. Too many distractions

If I'm in the middle of doing something on the computer, such as writing an article like this one, and an email comes in where I see that tiny icon at the lower right of my screen, I'm compelled to read it. I can't just ignore it. Must... read... email... And that totally breaks my train of thought.

Sure, I could turn my email client off. But then I'll forget to launch it again and miss an important message, which has happened before.

Reason 3. Stuff typed on-screen does not commit to memory

I'm referring to the memory in my head and not computer memory.

I type out things often. And because I type so much, much of what I type turns into the same noise I mentioned above. What this means is that if I used a computer or phone or tablet for note taking, I would promptly forget the note I put in there in just minutes. And notes don't mean much if they're forgotten in mere moments after you type them in.

Reason 4. You can't cross off finished tasks on an electronic screen

Yes, I know there are certain phone apps where you can take a stylus to virtually jot down notes, and probably even a few that allows you to cross out finished tasks...

...but it's not the same as actually crossing out finished tasks for real.

When you take that pen and cross out a task you finished, that feels good. There is a finality to it that electronic screens have never been able to replicate, and never will.

Write notes, and spend the cash on good pads and pens

I'm actually very picky when it comes to what I use to take notes with, and I have my reasons.

Here are those reasons. 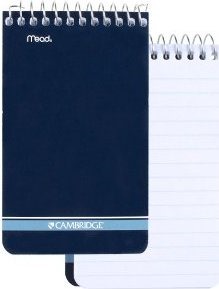 Above is a standard 70-sheet college ruled memo pad. And if you're thinking this is just like any other memo pad, it's not.

The best memo pads are the kind where the spiral is on the top and not the side, because it works for both right and left-handed people, and I happen to be left-handed. But even for righties, this is still the better type of pad to use because you get maximum use of every sheet.

Don't try finding these at a local pharmacy like CVS or Walgreen's, because they don't have them. They'll have memo pads, but always with the spiral on the left side.

When you want a real-deal, honest-to-goodness, proper memo pad with a top spiral, you either have to go to an office supply store to get it, or buy it online.

If you go to an office supply store like Staples to get these proper memo pads, don't be surprised if you have to search all around the store just to find them. At the Staples I go to, they are all the way in the back and really easy to miss. 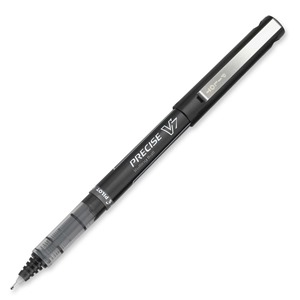 Nothing will discourage you from note taking faster than a crappy pen. The world is full of crappy pens, and it's a waste of your time to even bother with them.

The above is a Pilot Precise V7, which is a good pen and not crappy. There are two types of V series Pilots and two types of points. You can either get the ones with the capped tops as seen above or the retractable style, commonly known as a clicky pen. I personally prefer the capped kind because it's lighter, cheaper, and because there's no chance of "play" at the writing tip.

You'll notice there's also the Pilot Precise V5. What's the difference between the V5 and V7? The V7 is fine point, and the V5 is extra-fine point. For note taking, the V7 is the better of the two because the ink comes out slightly thicker and works better on memo pad paper.

What color of ink should you get? Black. Why? Because it's easier to read. There are Pilot Precise pens in assorted color packs if you want to try that out, but for note taking, the only ink color that matters is black.

When you see the cost of the Pilot Precise pens, you may get slight sticker shock. Trust me, these pens are worth the money.

How should you take down written notes?

Some people don't know how to take notes properly, so here's a quick tutorial on it.

Any task you have to do should fit on one line and only one line. If it doesn't, then you need to break it up into two tasks.

On a to-do list, you put month/day (or day/month, whichever you prefer) and then the task. The date you place is the day you wrote it and not the day it's due. So if you have a task of "buy pens," and you wrote it on January 20, the task would be written as "1/20 buy pens".

Why write it this way? So you know how old a task is just by looking at the list.

Rule #3: Make a mark in the corner for completed pages

When a page full of tasks is completed, the easiest thing to do is draw a star or filled-in box at the top right corner so you know every single thing on that page has been completed.

The general rule here is to keep completed pages in your memo pad for a few days just in case you ask yourself, "Did I remember to do [insert thing here you had to do]?" You can reference back to completed pages for that.

And yes, this means that when you cross out completed tasks, make sure what you wrote is still readable.

Rule #5: If you have to rewrite a task, also rewrite the original date

Sometimes you may have to rewrite a task if it gets shuffled back too many pages deep. That's fine, but also rewrite the original date so you're reminded of how old the task is.

When using a memo pad for task use, you want it all in a single pad. If you juggle around multiple pads, one will get preferential treatment over another and things won't get done. Put it all in one pad.

Rule #7: Tasks only; not goals

Don't put goals in a memo pad, because they will take a very long time to complete.

You will get great satisfaction out of crossing out stuff on a task list, so you should put the easy stuff there. For the more difficult stuff, use a dry-erase board, or print out the goal and tape it to the wall, or use a sticky-note, or use whatever you want. But don't use the memo pad for it, because that's simple-stuff-only territory.

You don't have a bad memory

One of the first things you'll notice by handwriting notes is how much more you remember stuff. You're remembering stuff because you actually wrote it down, and the act of physically writing something down commits what you write to memory better.

It doesn't matter how busy or not-busy your schedule is. What matters is remembering to do stuff so you get things done. So unless you have an incredible memory, which most people don't, start making handwritten lists.