Is low action on a guitar always the best way to set one up? 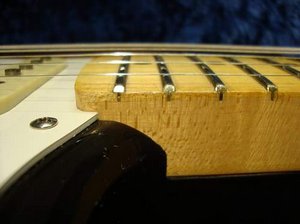 A common belief that every guitar should have the action (which in general terms means the string height) set as low as you can get it without fret buzz.

Well, that belief is wrong. The action of a guitar should be set up according to player preference first and always.

I personally set the action of my guitars to be what I call "medium-high", meaning not low but not high either. And I do this for the reason that if I don't, my fingers will run over other strings when I do bends.

This is a little difficult to explain, but I'll try my best. I apologize in advance if you get confused. Like I said, this is tough to explain.

With the 1 string 12th fret being held, the way I prefer my action is that the unheld 2 string should be resting half-way between the top and bottom of my finger.

Here's a quick crappy diagram I made to show you what I mean:

When looking at the above image, imagine you're sitting down holding your guitar and looking at a top-down view of your neck; that's what the above diagram represents. When you're holding down the 1 string (high E), the 2 string (B) is right above that.

In the way I set up a guitar, when I'm holding down the 1, 2 or 3 string, the unheld string directly above it should be half-way between the top and bottom of my finger and just below the fingernail as shown above. The 1 string is blue and being held down, and the 2 string is green and isn't being held. When holding down the 1 at the 12th, if the 2 has a position under my fingernail right around where the middle of my finger is height-wise, I know it's correct for me. And I really want to emphasize the for me part, because this is how I prefer action to be set up.

Why do I do this? Because on the 1 string I never bend down but always UP. And if the 2 string is set too low, my finger literally runs over that string when I try to bend up the 1.

This type of string action isn't what you would call "high" but rather "medium-high", as I call it. However it's definitely not low.

If you were wondering how I'm able to get sinfully sweet bends and vibratos on my strings, a lot of that has to do with the fact I do not have my strings set low.

On a final note, this is not to say you shouldn't set your strings low. Set up your action in a way that feels most comfortable for your style. I don't set my action low because then I can't do the bends I like.