Is the Casio F-91W the best wristwatch in the world? 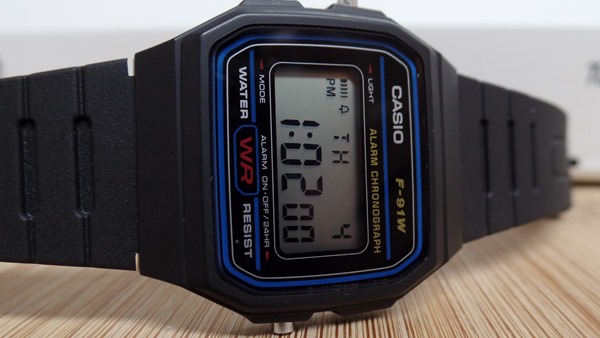 From what I understand, the wristwatch industry absolutely hates the Casio F-91W, and for good reasons. But before I get into that, up until very recently I had, unbelievably, never owned an F-91W. I do now. And it very quickly became the best wristwatch I own.

First, a genuine F-91W keeps time so well that you'd think it is secretly synchronizing with an atomic time server, but it doesn't. This thing doesn't even gain or lose so much as a second until more than a week has passed. I'm not kidding. Over the course of an entire year, an F-91W shouldn't gain or lose more than 3 minutes at most; that's some stellar performance right there.

Second, even though this watch is small, it's more readable than a watch twice its size. This is because the contrast of the LCD is near-perfect, meaning almost no discernible shadow from the segments. It is incredible how readable the little display is.

Third, the beep. I own other Casio digitals, but this one has an absolutely perfect beep sound. It's loud but strangely not obnoxious.

I like this watch so much that after owning it less than a week, I bought a second one as a backup. I don't suspect Casio will stop making the F-91W at any time soon, but if they ever do, at least I'm covered for the next, oh, 20 years. Heck, I might even buy a third just to make darned sure I'm not without one of these.

And yes, it typically takes the CR2016 battery about 7 to 10 years before it finally dies.

I finally understand why so many people love this watch

The F-91W is wristwatch perfection. Unbelievably accurate timekeeping, stupidly simple design, superior readability with near-perfect LCD contrast, all the function you need and nothing you don't.

Oh, and the best part. Cheap. Dirt cheap. This is why the wristwatch industry hates it so much.

From what I understand, Casio has been accused of trying to completely kill the wristwatch industry with its F-91W model along with other low-cost models. Prior to cheap plastic Casio digitals, a truly good and accurate wristwatch basically didn't exist.

There was a time when it was completely normal for wristwatches to gain or lose 5 to 10 minutes over the course of a week. In fact, to this day, it's still normal for even the most luxurious of mechanical movements to be +/- 5 to 10 minutes off per week even with the best of engineering. Quartz movement just can't be beat no matter what anyone says.

Accurate no matter where it's made, as long as it's genuine

What blows me away about the F-91W more than anything else is that you can totally depend on this thing. Whatever the F-91W states the time is, that is the time and you don't have to question it.

Something funny is that since this watch is so popular, there are many fakes out there. Fortunately, it's fairly easy to tell if you've got a fake or a real one.

The first and obvious thing is the LCD contrast. A genuine F-91W's display can be tilted almost flat and you will not see the display "shadow out" to 88:88. At any angle, it can be read easily.

Second is the "Easter egg". You hold down the right-side pusher for 2 seconds, and "CA510" appears on the display. 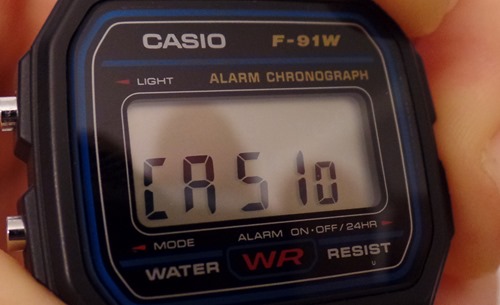 Third, the little "U" at bottom right, which is almost impossible to see without a magnifying glass, is printed just below the second S of RESIST at bottom right. On fakes, the "U" is larger and not aligned properly.

Fourth, the "WR" in the bottom middle has a very specific lean to both the W and the R. If you compare it to a fake, it's pretty easy to spot.

Now as far as where it's made, Casio has made this watch in 4 nations. Japan, Malaysia, China and Thailand. Mine is from Thailand, and I can assure you it is the genuine article.

Bad things about the F-91W?

There are only three.

First is the water resistance. Very low. You can splash it and submerge it for short periods of time, but that's about it. I wouldn't shower or swim with it on.

Second, the backlight for night viewing is very small and is not bright. Very dim, actually. It works, but just barely.

Third, the strap. It's Casio's infamous "resin" strap, meaning it will crumble apart after a few years. Fortunately, there are plenty of replacement straps out there and will continue to be for a long time.

There's not much in the way of tech that can match the longevity of an F-91W. It will outlast smartphones, PCs, laptops, tablets, most microwave ovens and a whole bunch of other stuff. While everything else breaks, the F-91W will continue to work.

To have any piece of tech work perfectly for a decade for under 10 bucks new? That's a modern day miracle, and it's why the F-91W might just be the best wristwatch in the world.